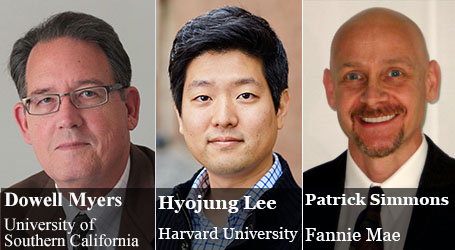 But how do these two radically different views on Millennial homeownership comport with data on young-adult home buying activity? This Perspectives presents analysis supporting our contention that the age-group approach produces a lagging view of Millennial homeownership demand that does not correspond with current market data on home purchases, whereas the cohort approach offers a consistent contemporaneous perspective. We show that the cohort approach detected a turnaround in young-adult homeownership demand starting between 2012 and 2014, years before age-group homeownership rates stabilized and before the media began reporting on increases in young-adult home buying.2 We also reconcile the age-group and cohort viewpoints, and in so doing show how the age-group approach embeds the legacy of past housing behaviors and distorts perceptions of the present, thereby concealing turning points in demand.

Revealing and Resolving the Age-Group Paradox

In our previous research, we used the Census Bureau's American Community Survey (ACS) to track changes in young-adult homeownership rates from both the age-group and cohort perspectives. The same data can also be used to count the number of 25-34 year-old owner-occupants who moved into their homes within the past 12 months, a proxy for young-adult purchases of primary residences.3 As another market indicator of young-adult homeownership demand, we also include in this study estimates of home purchases by first-time home buyers.4 To achieve consistency with our previous research, we track these home buying indicators between 2006 and 2016 across two-year intervals that correspond to different phases of the recession and recovery.

Exhibit 1 reveals the paradox created when these indicators of young-adult home buying activity are juxtaposed with age-group homeownership rate trends. Whereas the per capita homeownership rate for 25-34 year-olds declined continuously between 2006 and 2016, the numbers of young and first-time home buyers have risen notably since bottoming in 2010-2012.5 The annual number of young home buyers has increased by 21 percent from this bottom, whereas the number of first-time buyers has grown by 34 percent. In contrast, the per capita homeownership rate of 25-34 year olds fell by nearly two percentage points between 2010-2012 and 2014-2016. 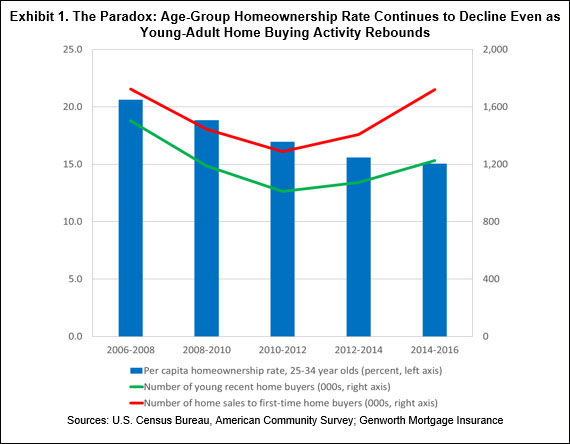 The paradox is that young-adult and first-time home buying have rebounded markedly during the economic recovery, even as homeownership rates for 25-34 year-olds have continued to decline. How is this possible? The explanation is revealed when we abandon age-group measurement and instead examine the net inflows of cohorts into homeownership as they transition to the next older age. Specifically, we examine the growth in homeownership over each two-year interval, as cohorts advance from age 24-33 to age 26-35. The rebound in these cohort inflows during the economic recovery is striking (Exhibit 2). We see that the trough of the cohort inflows is in 2010-2012, the period that also marks the bottom for both of our young-adult home buying indicators. 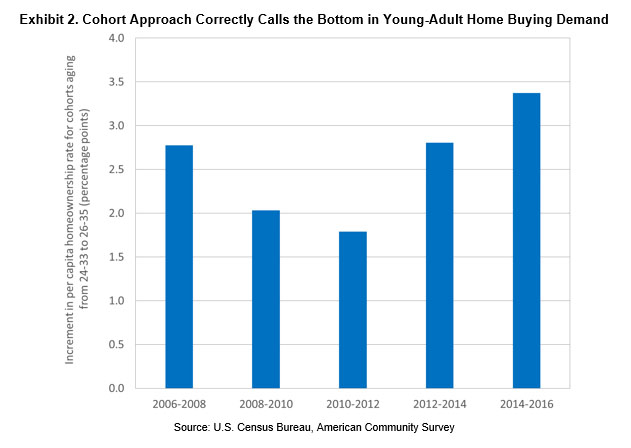 Reconciling the Age-Group and Cohort Perspectives

Why do the age-group and cohort perspectives tell such disparate stories of recent trends in young-adult homeownership demand? The answer is that the age-group approach does not measure current home buying behavior. Rather, the current percent of young adults who are homeowners measures the cumulative home buying experience of a cohort over its entire housing career up to its present age, within which recent home buying behavior is but a small subset. In contrast, cohort measurement emphasizes only the most recent increment of experience, and so it provides a more current measure of market behavior.6 The net change in homeownership attainment during the most recent period is closely related to the cohort’s current home buying activity, and thus tracks well with market indicators of demand such as the numbers of homes sold to young adults and first-time buyers.

The differences in the age-group and cohort approaches can be illustrated by comparing the history of homeownership accumulation for two different cohorts of 28-29 year-olds, an earlier cohort that reached this age in 2012 and a more recent cohort that arrived at this age in 2016 (Exhibit 3). Only four years apart, the histories of homeownership accumulation for these two different groups of 28-29 year-olds could hardly be more different. When these cohorts were early in their housing careers at age 22-23, they faced dramatically different housing and economic environments. When the earlier cohort was this age in 2006, the economy was still a year away from the Great Recession, mortgage credit standards were loose, and the national homeownership rate was near its all-time high. In contrast, the recent cohort was that young age in 2010, when the homeownership bust was well advanced, credit standards were much stricter, and the young-adult unemployment rate reached its cyclical peak. These drastically different economic climates are reflected in the homeownership rate differential between theses cohorts at age 22-23, with the earlier cohort enjoying a 1.5 percentage point advantage. (Compare the bottom segments of the two stacked bars in Exhibit 3.)

The earlier cohort's homeownership advantage expanded as it aged to 24-25 between 2006 and 2008, still riding the tail end of the housing boom and the 2000s economic expansion. It added 4.0 percentage points to its per capita homeownership rate, compared to an increment of only 2.7 points for the recent cohort, which was struggling through the late stages of the housing bust and the weak initial phase of economic recovery when it moved through the same age range between 2010 and 2012.

As the cohorts aged past their mid-twenties, however, the tables began to turn with respect to both the economic climate and the pace of homeownership attainment. The earlier cohort aged to 26-27 years old between 2008 and 2010, during the depths of the Great Recession and housing bust, whereas the more recent cohort traversed this age range between 2012 and 2014, when the economic recovery was well underway. The more recent cohort registered a homeownership increase across this age range (3.3 percentage points) that was roughly equal to that of its earlier counterpart (3.4 points). As the economy continued to improve between 2014 and 2016, the recent cohort accelerated its pace of homeownership attainment to 4.0 percentage points as it aged to 28-29 years old, far surpassing the 2.7 point increment achieved by the earlier cohort across the same age range. (Compare the top segments of the two stacked bars in Exhibit 3.) By age 28-29, these very different histories of homeownership attainment had added up to a cumulative per capita homeownership rate of 15.0 percent for the earlier cohort as of 2012, but only 13.5 percent for the more recent cohort in 2016.

The foremost implication of this historical reconstruction of homeownership accumulation is that only the homeownership increment added in the most recent interval comes close to representing current housing market behavior. In contrast, the bulk of the cumulative age-group rate was built up under very different economic conditions of prior periods. In our example, the homeownership rate for the 2012 group of 28-29 year-olds reflects weak gains of 2010-12, but those are overlaid on a large base of homeownership carried forward from more prosperous years. Conversely, the 28-29 age group observed in 2016 presents the opposite indications: Although it does indeed have a lower cumulative homeownership rate (which might be interpreted by some as a lower preference for homeownership), that is entirely a legacy of its small accruals during the recession and housing bust years. This cohort's most recent home buying behavior has been quite robust, with an incremental homeownership rate gain between 2014 and 2016 that exceeds or rivals any of the two-year accruals registered by the earlier, apparently more advantaged cohort.

The authors thank Mark Palim and Orawin Velz for valuable comments on the Working Paper upon which this Perspectives is based. Of course, all errors and omissions remain the responsibility of the authors.

2 Media accounts of rising Millennial home buying activity have become commonplace only in the last year or two, long after the turning point in demand detected by the cohort approach. See, for example, Susan Tompor, "Millennials finally embracing American Dream of home ownership," Detroit Free Press, May 5, 2017; Herb Weisbaum, "Who's Powering the Housing Market? Surprise! It's Millennials," NBCNews.com, June 5, 2017; and Laura Kusisto, "Homeownership Rate Rose in 2017 for First Time Since 2004…millennials spur buying activity," The Wall Street Journal, January 30, 2018. The last article cites an increase in the age-group homeownership rate for households under age 35, as reported in the Census Bureau's Housing Vacancy Survey (HVS), as evidence of growth in young-adult home buying demand. The HVS did not report a statistically significant year-over-year increase in the under-35 homeownership rate until the second quarter of 2017, years after the turnaround in young-adult homeownership demand evidenced via cohort analysis.

3 As a reality check on our ACS-based home buying proxy, we compared ACS estimates of all owner-occupant householders who moved into their housing unit within the past 12 months with National Association of REALTORS® estimates of principal residence home purchases. Trends in the two indicators tracked quite closely. In the text and exhibits, we will refer to the number of 25-34 year-old owner-occupants who moved into their units within the preceding 12 months as "young home buyers."

5 We measure the homeownership rate as the number of owner-occupant householders per 100 people, rather than using the more traditional approach of calculating homeowners per 100 households. We adopt per capita measurement because the more familiar per-household homeownership rate leaves unaccounted the variable factor of the rate of household formation from the population, which is particularly important for young adults and during sharp swings in the economy, such as experienced within our study period.

6 The net change in homeownership attainment for a cohort during any period reflects both gross inflows into homeownership during that period, typically via principal residence home purchases by members of the cohort who were previously renters or non-householders, and gross outflows due to foreclosure, divorce, temporary reversion to renting after job-related relocations, death, or other events. During the young-adult years, gross inflows largely dominate, and thus a cohort's homeownership rate generally increases fairly rapidly during the early stages of its housing career.