The Awakening of Millennial Homeownership Demand 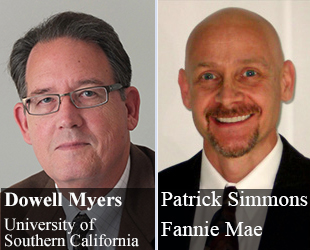 Subdued homeownership demand among Millennials has helped to perpetuate a frustratingly slow housing recovery. With more than 88 million members, the Millennial generation has the sheer bulk needed to propel the housing recovery to a higher level and it now fills the 25-34 year-old age range that traditionally accounts for the most first-time homebuyers.i Despite their impressive numbers, Millennials' housing market impact has been muted because they have a lower likelihood of buying homes than prior generations.

The Great Recession undoubtedly slowed Millennials' initial ascent into homeownership. But now that the economy has been recovering for nearly a decade, have Millennials finally begun to increase their homeownership attainment? This Perspectives answers this question by analyzing newly released data from the Census Bureau’s American Community Survey (ACS) and using two different change-measurement approaches that yield dramatically different views on the state of Millennial homeownership.ii

Popular perceptions of young-adult homeownership trends have been shaped by a traditional analytical approach that tracks homeownership rates for fixed age groups. This “age-group” approach compares the cumulative homeownership attainment for different groups of individuals at the same age but at different points in time. Cumulative homeownership attainment at a given age reflects not only a group’s current rate of ascent into homeownership under prevailing economic conditions, but also the legacy of its past pace of advance under sometimes very different economic circumstances. This is certainly the case for Millennials in their 30s, whose current homeownership rate reflects not only recent home-buying activity in a healthy economy, but also earlier housing decisions made amidst one of the worst economic downturns in U.S. history.

Applying age-group analysis to the ACS data reveals no rebound in young-adult homeownership rates despite years of economic recovery (Exhibit 1). Although the decline in homeownership has slowed or ceased across the young-adult age spectrum, no age group has experienced a statistically significant homeownership rate rise. This is true even between 2014 and 2016, a period of healthy employment and income gains for young adults.iii 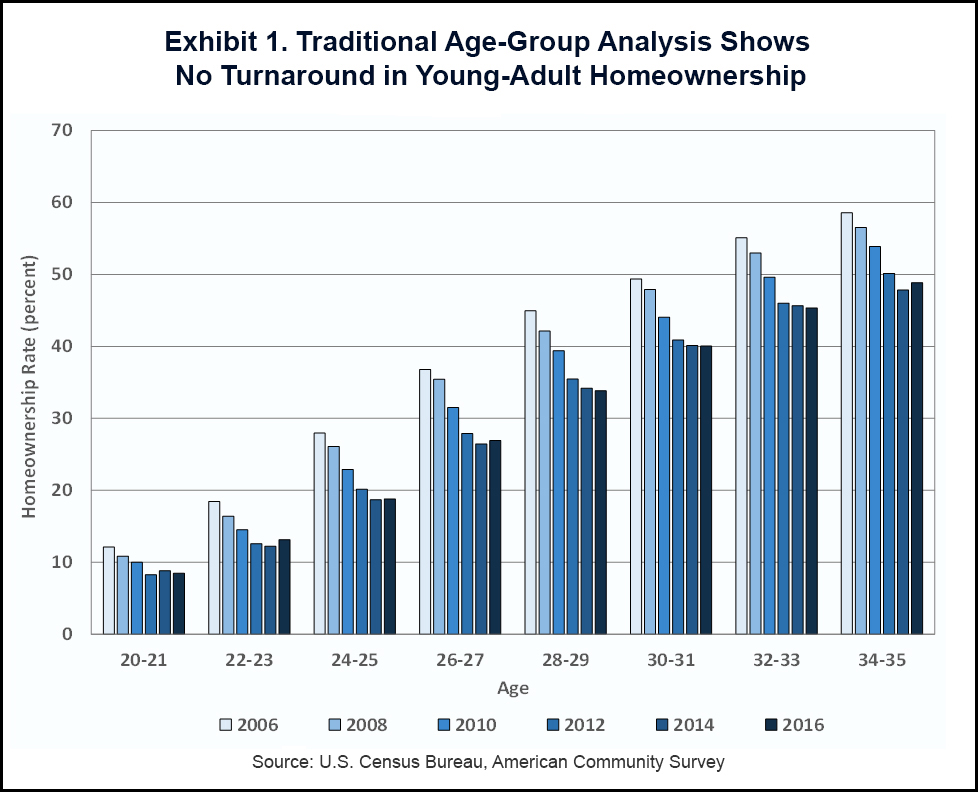 Second, the lack of homeownership progress despite years of economic expansion leads some to conclude that Millennials’ homeownership preferences are fundamentally different from prior generations. According to this view, many Millennials remain renters by choice, the vanguards of a new “Renter Nation” for whom homeownership has lost its longstanding allure. iv

By focusing on cumulative homeownership attainment as of a given age, the traditional age-group approach confuses recent home purchasing behavior with housing tenure choices made many years ago. In contrast, an alternative method called "cohort analysis" allows us to disentangle current from past home-buying behaviors.v Rather than focusing on cumulative homeownership attainment, cohort analysis tracks increments in the homeownership rate for a group of young people (cohort) as they grow older, advancing from one age group to the next. Homeownership rate increments for different cohorts passing through the same age range, but during different historical periods, can be compared, thus allowing us to determine if recent young-adult home-buying activity has quickened as the economy has improved.vi

Cohort analysis shows that the pace of young-adult home purchases accelerated substantially during the economic recovery, beginning first between 2012 and 2014, and then quickening further through 2016 (Exhibit 2). For example, those aging between 28-29 and 30-31 experienced homeownership rate increments during the economic recovery of almost 5 percentage points between 2012 and 2014 and nearly 6 percentage points between 2014 and 2016 (see green oval in Exhibit 2). These homeownership rate gains were two to four times greater than the gains registered by the two older cohorts passing through the same age range between 2008-2010 and between 2010-2012 (see red oval in Exhibit 2), periods encompassing the worst of the recession and the weakest part of the housing recovery. Indeed, for every age transition above 22-23→24-25, the cohort homeownership rate increases between 2014 and 2016 were significantly greater than the gains registered from either 2008-2010 or 2010-2012.vii 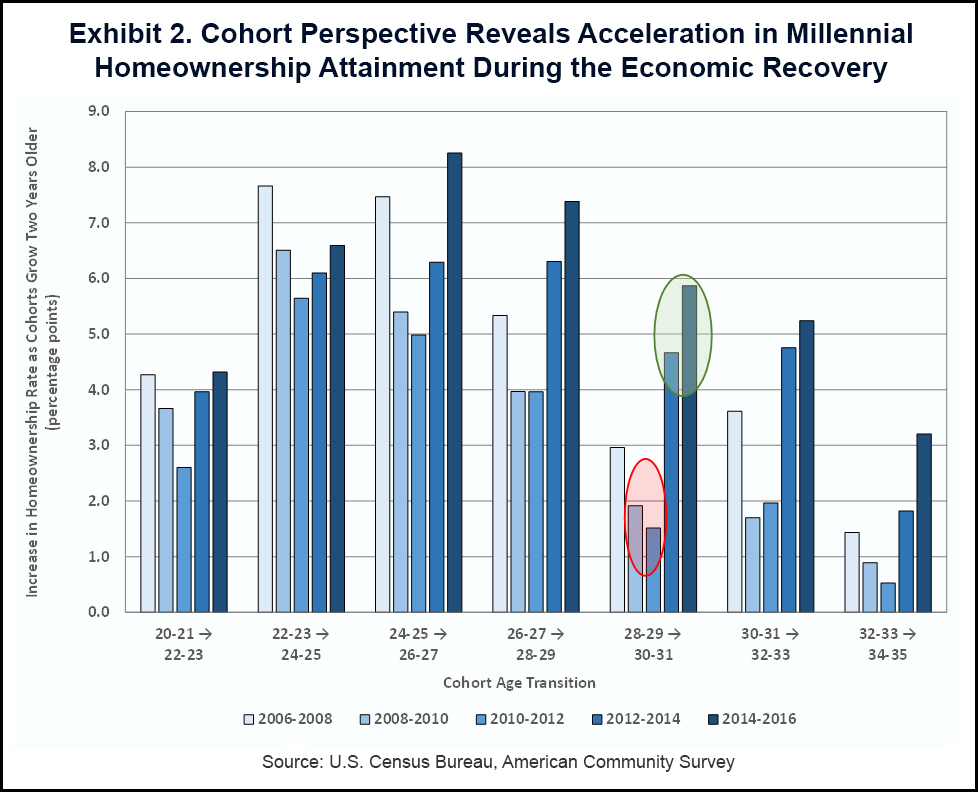 Compared with the age-group approach, the cohort perspective suggests a more optimistic outlook for Millennial homeownership. With their recently accelerated ascent into homeownership, Millennials have already begun to close the homeownership attainment gap with their predecessors. If this acceleration continues, traditional age-group analysis will eventually show an upturn in young-adult homeownership rates.

The cohort perspective also casts doubt on the proposition that Millennials have diminished preferences for homeownership. Millennial homeownership attainment in very recent years has upshifted substantially in response to improvements in the economy, consistent with attitudinal surveys indicating that young adults maintain very positive perceptions of homeownership.viii

The cohort perspective points to a budding Millennial homeownership recovery that was gaining momentum through 2016, the latest year of ACS data. However, since then some housing market headwinds have strengthened, not the least of which is an increasingly severe housing supply shortage. Forthcoming research from Fannie Mae’s Economic & Strategic Research Group will continue to explore the Millennial homeownership rebound, including an investigation of the roles of housing supply and other factors in shaping regional variations in the pace of recovery. This future work should not only help us to better understand the geography of the Millennial homeownership awakening, but also hopefully provide some insights into its likely durability in the face of intensifying housing market challenges.

The authors thank Orawin Velz and Mark Palim for valuable comments on an earlier draft of this Perspectives. Of course, all errors and omissions remain the responsibility of the authors.

i In this Perspectives, Millennials are defined as those born between 1981 and 2000 and aged 16 to 35 in 2016. The estimated population of the Millennial generation is based on the Census Bureau’s 2016 Population Estimates. According to the National Association of REALTORS®2015 Profile of Home Buyers and Sellers, 58 percent of first-time home buyers are aged 25 to 34.

iii Between 2014 and 2016, the unemployment rate of 25-34 year-olds declined by 1.4 percentage points to 5.1 percent, commensurate with the 1.3 point improvement for the entire working-age population. During the same period, the median real income for households headed by 25-34 year-olds increased by 10.8 percent, compared with an 8.5 percent gain for all households. Home prices also rose at a solid pace during this period, with the Federal Housing Finance Agency’s purchase-only house price index increasing by 12.1 percent between 2014 and 2016. Strong home price gains have an ambiguous effect on young-adult homeownership, as they raise home purchase affordability obstacles for some young households, while spurring others to accelerate home purchases in anticipation of further price gains.

v The cohort analytical approach has foundations in John Pitkin and George S. Masnick, 1980, “Projections of Housing in the U.S., 1980 to 2000, by a Cohort Method,” Annual Housing Survey Studies No. 9, U.S. Department of Housing and Urban Development, and John Pitkin and Dowell Myers, 1994, “The Specification of Demographic Effects on Housing Demand: Avoiding the Age-Cohort Fallacy,” Journal of Housing Economics (3, 4): 240-250. The cohort perspective is sometimes used to project future changes in homeownership rates. For a recent example, see Dowell Myers and Hyojung Lee, 2016, “Cohort Momentum and Future Homeownership: The Outlook to 2050”, Cityscape: A Journal of Policy Development and Research (18, 1): 131-143.

vi The very large sample sizes of the ACS allow us to isolate changes in home buying behavior for narrowly defined birth cohorts, measured over short intervals of time. We can thus clearly distinguish the rate of Millennial homeownership advance during the last few years of economic recovery from the pace observed during the Great Recession.

vii Homeownership rate gains for every age transition were greater between 2014 and 2016 than between 2012 and 2014, but differences in most cases were not statistically significant.

viii Fannie Mae’s National Housing Survey indicates that a majority of renters aged 25-34 think that owning makes more sense than renting from a financial and lifestyle perspective. The vast majority also plan to own a home at some point in the future. See Sarah Shahdad, “Millennials Look to Income Improvements as Key to Unlocking Homeownership,” Fannie Mae Perspectives, August 21, 2015, https://www.fanniemae.com/portal/research-insights/perspectives/082115-shahdad.html