Lenders Foresee Return to a More 'Normal' Housing Market in 2022

WASHINGTON, DC – For the fifth consecutive quarter, a plurality of mortgage lenders expect near-term profitability to decrease, according to Fannie Mae's (FNMA/OTCQB) Q4 2021 Mortgage Lender Sentiment Survey®. In fact, according to the survey, 65% of mortgage lenders believe profit margins will decrease in the next three months, up from 46% in the prior quarter, while 31% believe profits will remain the same and 3% believe profits will increase. Competition from other lenders and market trend changes were once again the top reasons cited for the profitability expectations.

"This quarter's MLSS results suggest that the housing market may be poised to return to a more 'normal' state in the new year, following the boom experienced over the past two years due to historically low mortgage rates and pandemic-related changes in homebuyer behavior," said Fannie Mae Senior Vice President and Chief Economist Doug Duncan. "Mortgage lenders’ profitability outlook has significantly weakened over the past several quarters from its early pandemic run-up. However, net loan production income levels, as reported by the Mortgage Bankers Association, and the width of the current primary-secondary spread (an indicator of potential profitability) allow us to level-set. With both still slightly above pre-pandemic levels, we expect lenders to continue investing in capacity efficiency and process streamlining to maintain profitability despite the thinner-margin environment."

Survey Highlights and Other Notes

In coordination with PSB, Fannie Mae also surveys consumers monthly as part of its National Housing Survey®, of which the Home Purchase Sentiment Index® is derived. In November, while the overall index remained flat, consumers' differ widely on their views of homebuying and home-selling conditions. Only 29 percent of consumers reported that it was "a good time to buy" a home, while 74 percent believe it's a "good time to sell." Pessimism toward the overall economy also reached a 10-year high, with 70 percent of consumers reporting that the economy is on the "wrong track". 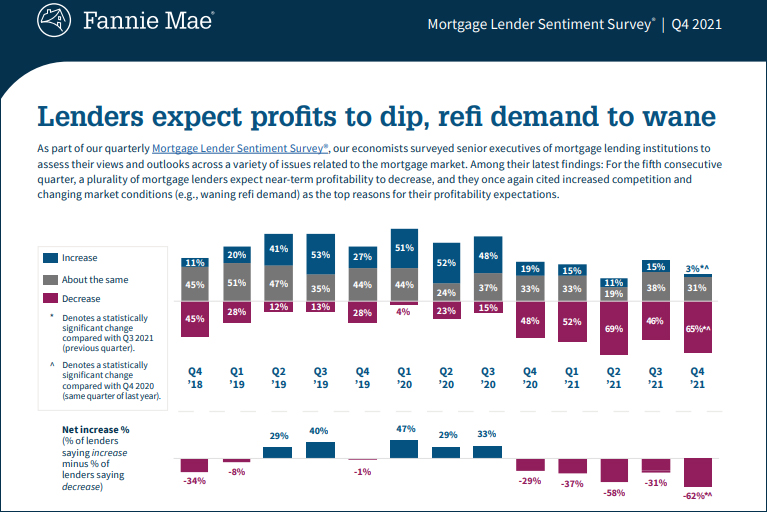