Mortgage lenders have reported a net positive profit margin outlook for a third consecutive quarter, according to Fannie Mae’s third quarter 2016 Mortgage Lender Sentiment Survey®. Conducted in August, the survey results show that 28 percent of lenders said they expect their firm's profit margin to increase over the next three months, compared with 17 percent who expect it to decrease and 55 percent who expect it to remain roughly the same. When asked what they expect to drive the increase, the top two reasons remain operational efficiency and technology, and consumer demand – the same two factors cited in every survey. However, among lenders who expect a decrease in their profit margin, the share citing government regulatory compliance as a driving factor declined significantly, reaching a survey-low 39 percent and compared with 61 percent during the same period last year. This marks the first time in the survey’s history that government regulatory compliance is not the top reason for eroding profit outlook.

"For lenders, the most encouraging aspect of the survey is a significantly brighter profit outlook this year compared with last year," said Doug Duncan, senior vice president and chief economist at Fannie Mae. "More lenders, on net, reported a positive profit outlook for the third straight quarter, the first time that has happened since the survey's inception. Their perception of profit outlook in the third quarter of this year is in stark contrast to the third quarter of 2015, when a sizable net share of lenders expected a deteriorating profit outlook over the next three months. It appears that lenders have incurred the increased compliance costs from new regulations such as TRID, and are now on a stabilized though higher-cost footing to focus on growth strategies. However, any upward move in interest rates will bring reduced origination volumes and competitive pressure on profits. That pressure would likely result in lowered expectations and additional demands for cost containment." 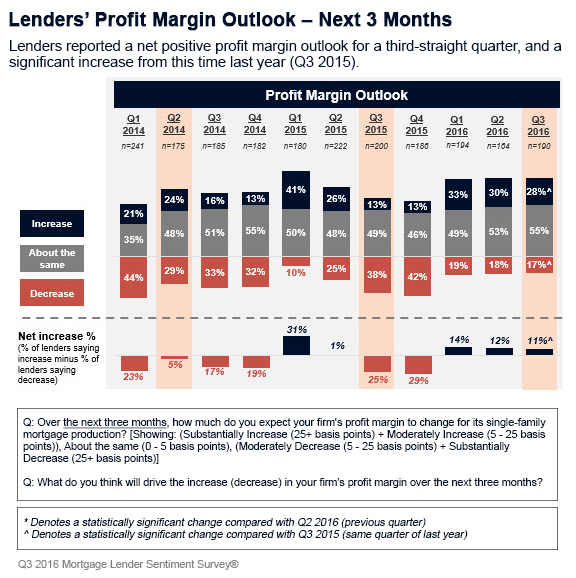 On this webpage you will find a news release with highlights from the survey results, the Q2 2016 data summary highlighting key attitudinal indicators, a detailed research report, the questionnaire used for the Q2 2016 survey, and FAQs providing additional information about the survey.