September 25, 2017
Facing constrained mortgage demand and a negative profit margin outlook, more lenders say they have eased rather than tightened home mortgage credit standards, according to Fannie Mae's third quarter 2017 Mortgage Lender Sentiment Survey®. Across all loan types – GSE Eligible, Non-GSE Eligible, and Government – the net share of lenders who reported easing credit standards over the prior three months reached a new high since the survey’s inception in March 2014, after climbing each quarter since Q4 2016.

On net, lenders’ profit margin outlook has remained negative for four consecutive quarters. "Competition from other lenders" was again cited as the primary reason, reaching a new survey high for the third consecutive quarter. In addition, the net share of lenders reporting growth in purchase mortgage demand over the prior three months has fallen for all loan types year over year, reaching the lowest third-quarter reading in the past two years. However, the net share of lenders expecting an increase in mortgage demand over the next three months remains relatively stable for the same quarter year over year.

“Lenders further eased home mortgage credit standards during the third quarter, continuing a trend that started in late 2016. In particular, both the net share of lenders reporting easing on GSE-eligible loans for the prior three months and the share expecting to ease standards on those loans over the next three months increased to survey highs,” said Doug Duncan, senior vice president and chief economist at Fannie Mae. “Lenders’ comments suggest that competitive pressure and more favorable guidelines for GSE loans have helped to bring about more easing of underwriting standards for those loans. We believe that the GSEs’ attempts to relieve repurchase concerns and expand credit for creditworthy borrowers have contributed to the easing trend. Meanwhile, market competitiveness also led to the fourth consecutive quarter in which lenders’ net profit margin outlook deteriorated. The share of lenders citing competition from other lenders as the key reason for a negative profit market outlook rose to a new survey high.” 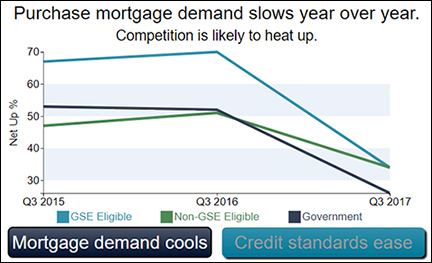 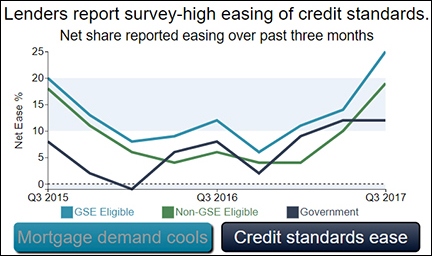 On this webpage you will find a news release with highlights from the survey results, the Q3 2017 data summary highlighting key attitudinal indicators, a detailed research report, the questionnaire used for the Q3 2017 survey, and FAQs providing additional information about the survey.