Why Are Young Adults Living with Their Parents and When Will They Move Out? 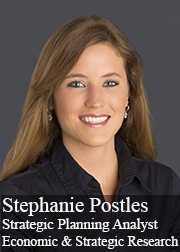 The increase in adult children living with their parents has raised important questions regarding household formation and its impact on owning, renting, and the demand for new housing construction. The percent of young adults, aged 18 to 34, who are living with their parents has increased from an average of 27 percent between 1990 and 2006 to 31 percent in 2013 (a total of approximately 22 million).1 Because young adults, especially the older ones, traditionally represent a substantial share of first-time homebuyers, their delayed decision to form a household has contributed to a depressed rate of household formation and housing demand. Young adults also have been experiencing higher rates of unemployment and delayed marriages. 2

Financial Concerns Are the Primary Reason

Survey results (see Chart 1) show that financial reasons are the primary response given by parents for why their adult children are not living in a separate home. Parents say by a large margin that the younger (age 18-22) adult children are living with them because "they are saving money while enrolled in school." Also, given that the vast majority of this younger age group has been reported in our survey as "not currently employed in a paying job" or "employed part-time," this impedes their ability to live on their own.

When asked about their older adult children (age 23-34), parents' responses were more diverse. Their top responses include:

Overall, financial concerns, in aggregate, also are the primary reason among the older age group for living at home, even though half of this group is employed full-time. 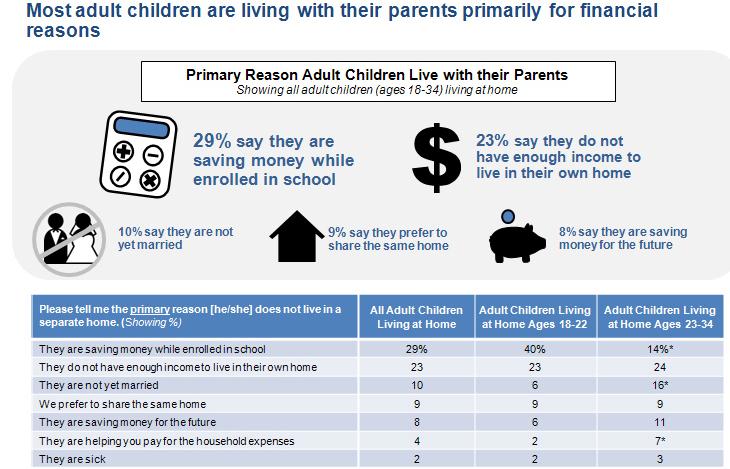 Most Parents Prefer Adult Children to Live with Them

Interestingly, the 2012 American Community Survey (ACS) shows for those householders 34 years old and younger that the percentage of those renting was 67 percent and the homeownership rate was 33 percent. When we adjust Fannie Mae’s National Housing Survey results to be more comparable to the ACS results by considering only the rent and buy populations, the data show 66 percent are more likely to rent and 34 percent are more likely to buy for those 34 years old and younger  – very similar to the ACS results.  This could imply that young adults currently living with their parents may not have a substantial impact on shifting the near-term homeownership rate when they do move out of their parent’s home. It is important to note, however, that a recent National Housing Survey study found that more than 90 percent of young renters said they are likely to buy a home at some point in the future.

Overall, results suggest that a combination of personal financial constraints, age of the adult child, and parental preferences encourage young adults to live with their parents. Given most parents’ preference for the adult children to remain at home and the potential for a mutually beneficial experience, we will see if this becomes a more permanent lifestyle trend that slows household formation even as the economy improves. Given that financial reasons account for the vast majority of parents’ responses for why their young adult children are living with them, it seems likely that these young adult children, especially older young adults, will start to form their own households once they feel confident about their financial situation and future prospects.

The author thanks Steve Deggendorf, Li-Ning Huang, Tom Seidenstein, Pat Simmons, Orawin Velz, and Sarah Shahdad for valuable comments in the creation of this commentary. Of course, all errors and omissions remain the responsibility of the author.

Opinions, analyses, estimates, forecasts and other views of Fannie Mae's Economic & Strategic Research (ESR) group included in this commentary should not be construed as indicating Fannie Mae's business prospects or expected results, are based on a number of assumptions, and are subject to change without notice. How this information affects Fannie Mae will depend on many factors. Although the ESR group bases its opinions, analyses, estimates, forecasts and other views on information it considers reliable, it does not guarantee that the information provided in this commentary is accurate, current or suitable for any particular purpose. Changes in the assumptions or the information underlying these views could produce materially different results. The analyses, opinions, estimates, forecasts and other views published by the ESR group represent the views of that group as of the date indicated and do not necessarily represent the views of Fannie Mae or its management.

The views expressed in this article reflect the personal views of the author, and do not necessarily reflect the views or policies of any other person, including Fannie Mae or its Conservator. Any figures or estimates included in an article are solely the responsibility of the author.

2 Unemployment rate among young adults (age 18-34) was 10 percent in 2013, compared to 7 percent for the total population. Age at first marriage rose from an average of 26 years old during 1990 to 2006 to 28 years old in 2013. Source: U.S. Census Bureau, Current Population Survey, March and Annual Social and Economic Supplements, 2013 and earlier.

3 Data for this analysis was collected over a three- month period from September 2013 to December 2013. For more details about the National Housing Survey, please see https://fanniemae.com/portal/research-and-analysis/housing-survey.html.