The Two Phases of the Housing Bubble: Part II 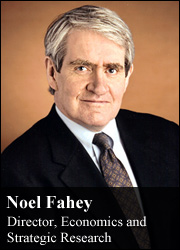 Part I of this Commentary documented how families found it increasingly difficult to afford rapidly-appreciating houses from mid-2003 through mid-2006. It showed how mortgage securities issued by Wall Street – Private-Label Securities (PLS) – increased their market share from the Government National Mortgage Association (GNMA) and from the government sponsored enterprises (GSEs – Fannie Mae and Freddie Mac).

Coincident with the growth of the PLS market was the explosion in nontraditional mortgage products which were mostly adjustable-rate mortgages (ARMs) of various types as compared to the fixed-rate mortgages (FRMs) that GNMA and the GSEs specialized in. The difference in product mix between the GSEs and PLS is shown in Exhibit 1 and the difference in relative performance is in Exhibit 2.

Over the 2004-2006 period, less than one-fifth of the loans backing newly-issued GSE mortgage-backed securities (MBS) were adjustable-rate mortgages. In contrast, almost three-quarters of the loans packaged in PLS were ARMs (Exhibit 1).1

Exhibit 2 compares serious delinquency rates for GSE-financed versus PLS-financed loans by ARM or FRM product line. It shows the percent of such loans that were originated in the 2004-2006 period and which had been 90 or more days past due at any date before the end of 2009. For fixed-rate mortgages, the PLS delinquency rate was three times the GSE rate (22.1% versus 7.4%). For adjustable-rate mortgages, the ratio for PLS was 2.6 times that for the GSEs (32.3% versus 12.6%). This works out to an overall delinquency ratio for PLS loans that was 3.5 times worse than for GSE loans (29.5% versus 8.4%).

This shows that PLS loans performed much worse than GSE loans because of both an unfavorable product mix and inferior performance within each product class. We will see below that this dynamic goes much further down to an even deeper granular level than just the FRM/ARM divide.

Outside of the ARM/FRM disparity between the two sectors, another explanation for the difference in loan performance between GSE MBS and PLS is the difference in risk characteristics in the loans backing each type of security.

A loan-to-value ratio of 80% or less (or a down payment of 20% or more) is the customary breakpoint used in the industry to determine the safest category as far as LTVs go.5 For the GSEs, 84% of loans fell in this category compared to 72% for PLS (Exhibit 3). For credit scores, 660 is often regarded as the threshold for the safest loans and the difference here is even more striking than with LTVs – 83% of FICOs for GSE loans were above 660 compared to 49% of PLS loans (Exhibit 4).6

Putting the two criteria together, 73% of GSE loans had LTV ratios of less than 80% and FICO scores greater than 660. For PLS, the percentage is 40%.

If we dig down deeper into the FHFA data and control for these underwriting criteria, the pattern that is shown in Exhibit 5 emerges. This looks at how GSE loans performed versus PLS loans if we slice the data by the LTV and FICO underwriting criteria that FHFA provides.

Exhibit 5 divides both FRM and ARM loans (as well as combined total loans) into nine separate buckets using a 3x3 grid formed from three LTV ranges and three FICO score ranges (not counting the cells for sub-totals and totals). With nine buckets for FRMs and nine for ARMs, there are a total of 18 independent cells in the table in Exhibit 5 (the nine non-shaded cells for both FRMs and ARMs).

In every one of the 18 cells, the serious delinquency rate for loans pooled in GSE MBS is less than the corresponding cell for loans backing PLS.

The differences in credit performance between loans backing PLS and GSE MBS are clear. The analysis in this Commentary shows that three developments help explain the wide divergences in the performance numbers:

1 Source for all of the data in Part II of this Commentary is from the Federal Housing Finance Agency (FHFA) based on Appendix Tables B-1 and B-3 at https://www.fhfa.gov/Default.aspx?Page=313.

4 The credit score is the FICO® Score developed by the Fair Isaac Corporation. The score ranges between 350 and 850. See https://www.myfico.com/Downloads/Files/myFICO_UYFS_Booklet.pdf.

5 For instance, the Fannie Mae Charter Act (https://www.fhfa.gov/GetFile.aspx?FileID=29) requires the company to acquire credit protection from a qualified insurer on the amount of any mortgage it purchases that is in excess of 80% LTV.

6 For example, the Fair Isaac Corporation, the creator of FICO scores, defines 660 as the threshold for a “good” FICO score (see https://scoreinfo.org/FICO-Scores/What-Score-Means.aspx).

7 The LTV ratios shown do not capture any second liens secured by the property that were present at origination.