TRID: Larger Lenders Have the Advantages for Now

The Consumer Financial Protection Bureau (CFPB) adopted the TILA-RESPA Integrated Disclosure (TRID) rule as part of its "Know Before You Owe" initiative. The TRID rule replaced the familiar Good Faith Estimate and HUD-1 with two new disclosures: the Loan Estimate, with more extensive upfront details of the proposed loan; and the Closing Disclosure, with itemized costs and fees, many of which cannot vary from the Loan Estimate.1 The TRID rule also places new responsibility on lenders for the timing, accuracy, and completeness of the disclosures, requiring lenders to revamp their disclosure and closing processes.

However, some lenders, in particular larger ones, appear to have leveraged the situation to their advantage. Despite the complexity of TRID compliance, our survey results show that nearly one-third of lenders, in particular larger lenders (44 percent), said that moving to TRID disclosures gave them a competitive advantage. And only 12 percent said it put them at a competitive disadvantage. Many small to mid-sized lenders indicate that larger institutions are able to invest more to upgrade systems and have in-house compliance resources to increase efficiency and competitive advantages.

According to the survey results, TRID compliance resulted in a reported average of nearly seven additional days to close a loan. This result is consistent with other studies.3 Although most lenders expect this time period to shorten as they gain more experience, coping with the demands of the spring buying season may test even the most prepared of lenders. Lenders reported that confidence in their ability to close a loan quickly is a more critical competitive issue than is price, although a sizeable 44 percent say they raised loan fees as a result of TRID.4

The survey results confirm in large measure the sense that lenders and their service providers have had difficulties in transitioning to TRID, particularly among smaller lenders. As is evident from trade association and Congressional proposals in recent months, lenders remain concerned over how to comply with TRID and the consequences for non-compliance. Although there have been some suggestions in media reports in recent weeks that lenders’ concerns over TRID implementation have receded somewhat,5 there is a growing sense of unease among the lender community over the interpretations and policies of due diligence firms and secondary market investors regarding TRID compliance.6 Finally, it will remain to be seen whether the competitive advantage that larger lenders reported as a result of TRID implementation will be sustained or whether small and mid-sized lenders will close this gap using their own resources or through innovative third-party vendors. 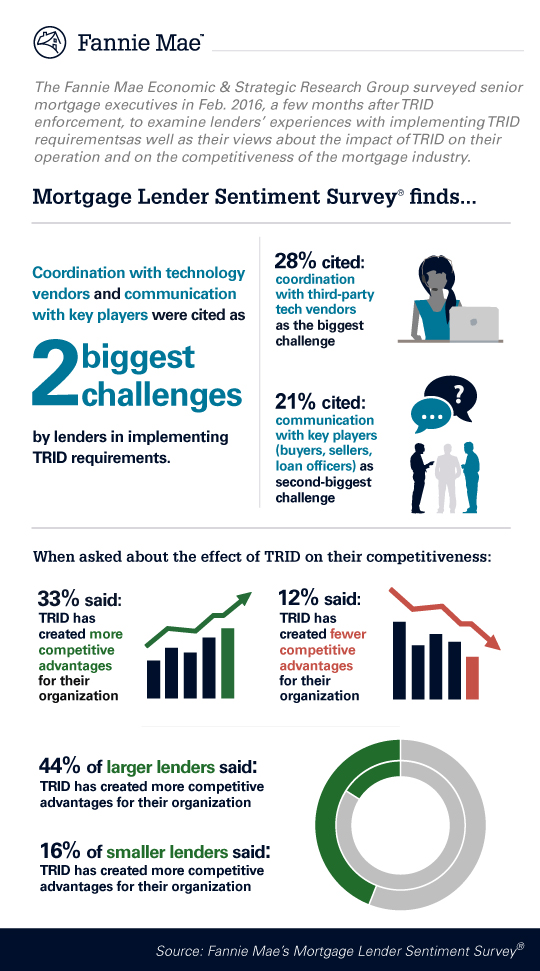 The author thanks John Burley, Sheilah Goodman, David Keil, Tom Seidenstein, Doug Duncan, Steve Deggendorf, and Li-Ning Huang for valuable comments in the creation of this commentary and the design of the topic analysis questions. Of course, all errors and omissions remain the responsibility of the author.

Opinions, analyses, estimates, forecasts and other views reflected in this commentary should not be construed as indicating Fannie Mae's business prospects or expected results, are based on a number of assumptions, and are subject to change without notice. How this information affects Fannie Mae will depend on many factors. Changes in the assumptions or the information underlying these views could produce materially different results.

1 For details about TRID, please check the CFPB's website at https://files.consumerfinance.gov/f/201508_cfpb_tila-respa-integrated-disclosure-rule.pdf).

2 Similar findings were observed from the ABA TRID Study which shows that 78 percent of banker participants reported that, as of February when the survey was taken, they were still waiting for system updates.

3 Other research has shown similar findings. For example, the TRID Survey conducted by the American Bankers Association (ABA) among 548 banker participants in February shows that 77 percent reported increased delays in closing, with an average of 8 additional days to close a loan. The National Association of Realtors' (NAR) January 2016 REALTORS® Confidence Index Survey Report conducted among 3,109 realtors shows that the median number of days to close a contract was 42 days in January 2016, up from 36 days in July 2015, https://economistsoutlook.blogs.realtor.org/2016/03/09/contracts-that-closed-in-january-2016-typically-took-42-days-to-close

4 Details about the types of fees and the amount of increase were not examined in the current study. However, the TRID Survey conducted by the American Bankers Association among 548 banker participants in February shows that 25 percent reported they have increased the total cost to the consumer to obtain a loan with an average increase of $300 per transaction. Higher loan fees to consumers vary widely, ranging from closing fees, origination fees, attorney fees, appraisal fees, to application fees. The "TRID – Impact and Experience" study by STRATMOR Group shows that TRID has increased the back office fulfillment and post-closing costs by an average of $209 per loan.

5 The "TRID – Impact and Experience" study study conducted by STRATMOR Group shows that TRID implementation seems to be largely complete, with the vast of majority (87 percent) of survey respondents reporting implementation either fully or mostly accomplished. Only 1 percent said their efforts were behind. Similarly, Ellie Mae’s latest March Origination Insight Report stated that the average time to close all loans decreased to 44 days, a 12-month low.

6 Fannie Mae issued guidance last October (LL-2015-06) stating that until further notice it would not be reviewing loans for technical compliance with TRID, and would not require repurchase for violation of TRID requirements except in the event that lender used the wrong form, or if there was a TRID violation found by a court or regulator that imposed assignee liability on Fannie Mae or impaired enforcement of the note or security instrument.