Transitioning to “normal”: What does a healthy housing market look like and how far off is it? 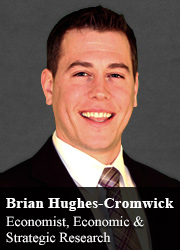 These are just a few examples of housing market conditions that, while rebounding above recent crisis-induced levels, remain depressed. This begs two questions: 1) what is a “healthy” or “normal” U.S. housing market? and 2) how long will it take us to get there? While there are many aspects of a healthy market, this commentary focuses on sustainable levels of new production of housing units to meet future demand. We deem this sustainable level as representing normal housing production.

Figure 1: Demographic factors and historical trends suggest an annual average demand for nearly 1.8 million new housing units in the second half of the decade. 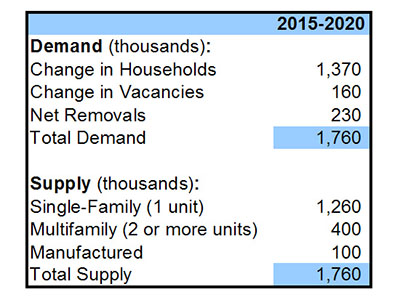 The central determinant in forecasting the normal level of housing production is to derive future housing demand. We forecast a trend level of demand during the second half of the decade of 1.76 million units per year, which derives from three major components1: 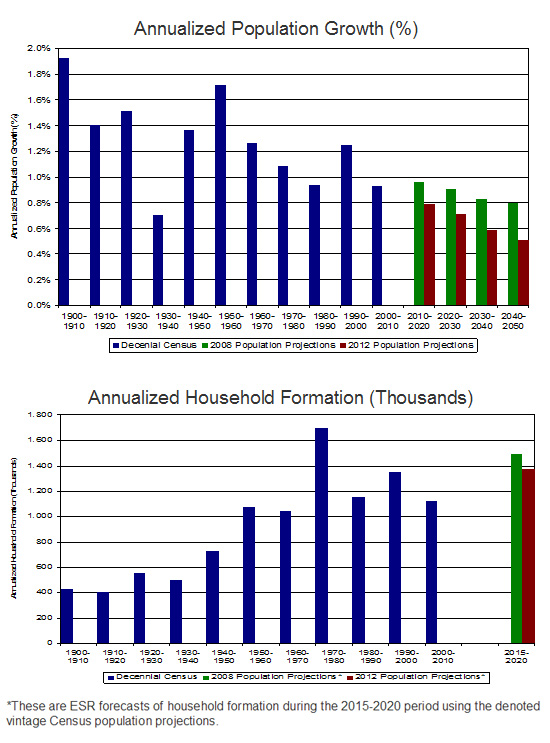 2) Change in Vacancies: Growth in vacant housing units is the second component of new housing demand forecast. Additional vacant housing units are required in a growing housing market to satisfy new demand for vacation and second homes, as well as to accommodate movement and ensure smooth functioning of the market. Based on our household forecast, and the historical relationship between households and vacancies, we expect annual growth in vacant units to reach approximately 160,000 units during the second half of this decade.

3) Net Removals: The final component of new housing demand, net removals of housing units from the stock, comprises multiple distinct flows including demolition of obsolescent housing; losses due to natural disasters, fires, and similar events; combinations or subdivisions of existing housing units; and conversions of structures to and from residential use. We calculate net removals using a residual method that subtracts the change in the housing stock between decennial censuses from total housing production. Based on this approach, we expect annual net removals to account for approximately 230,000 units of new housing demand by the second half of this decade.

During the mid-2000s housing bubble, residential construction outpaced fundamental demand for housing, creating an excess supply of housing units. In the aftermath of the bubble, new construction fell more than new housing demand, resulting in absorption of some of the excess supply. By the second half of the decade, we expect the excess supply to be worked off and to return to an environment where new housing demand and housing production are aligned. After three straight years of averaging roughly 600,000 units, housing starts rebounded to 780,000 in 2012. As household formations accelerate and excess supply is absorbed, total housing starts will trend to nearly 1.7 million units annually, with manufactured homes expected to meet the rest of the housing demand, driving overall housing unit production to almost 1.8 million units (Figure 3).

Figure 3: We expect total housing starts to trend toward nearly 1.7 million units by 2016.

During the recession, mortgage defaults and tighter lending standards drove the decline in the homeownership rate from its peak. Now, a larger share of newly-formed young adult households, in addition to recently foreclosed-upon households, will likely rent for some time before owning, as tight lending standards are likely to persist. Thus, we expect the single-unit share of total new production to be lower than the previous decade prior to the housing bust.

In conclusion, the housing market experienced a once-in-a-generation boom/bust cycle in the last decade from which it will take several more years to fully recover. We tentatively target 2016 as the year in which the housing market will once again be “normal,” marking a full 10-year transition process from when the market first collapsed in 2006. We expect some volatility in this transition as the market moves from depressed levels toward a more healthy and stable framework. This transition continues to be a bumpy move from a market first dominated by excess, then restructuring and repair, and finally a return to demographic demand fundamentals.

Opinions, analyses, estimates, forecasts and other views of Fannie Mae's Economic & Strategic Research (ESR) group included in this commentary and related Housing Insights should not be construed as indicating Fannie Mae's business prospects or expected results, are based on a number of assumptions, and are subject to change without notice. How this information affects Fannie Mae will depend on many factors. Although the ESR group bases its opinions, analyses, estimates, forecasts and other views on information it considers reliable, it does not guarantee that the information provided in these materials is accurate, current or suitable for any particular purpose. Changes in the assumptions or the information underlying these views could produce materially different results. The analyses, opinions, estimates, forecasts and other views published by the ESR group represent the views of that group as of the date indicated and do not necessarily represent the views of Fannie Mae or its management.

1 For details on our methodology and assumptions of individual demand components please see the Appendix.