Student Debt: Whose Homeownership Rate Does It Hurt Most? 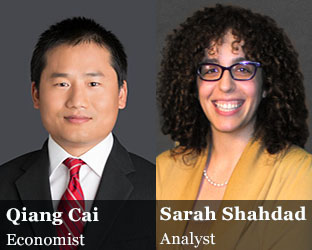 Obtaining a college degree can increase one's earning potential, but it often comes with the burden of student loans. Total U.S. student loan debt has more than tripled in the last 10 years, with a rate of serious delinquency (at least 90 days late) surpassing that of any other type of debt1. While the burden of student loan debt tends to hinder homeownership 2, 3, the benefit of a college degree tends to have the opposite effect4.

We analyzed Fannie Mae National Housing Survey® data to shed light on the net effect of student loans and obtaining at least a bachelor's degree on homeownership likelihood. We found that, on average:

Student loan holders who completed their bachelor's degree or higher are 27 percent more likely to be homeowners than high school graduates who did not attend college and do not have student loans. This analysis is limited to those aged 25-44, since this is the age range in which student loans are most prevalent. Within this age range, the analysis further controls for the positive effect of older age on homeownership.

Still, those with at least a bachelor's degree and no student loan debt are the most likely homeowners – 43 percent more likely than high school graduates who did not attend college and do not have student loans. This further confirms the strong positive effect of having at least a bachelor's degree on homeownership likelihood. The college grads in this population either did not take on student debt or had paid off any student debt prior to the survey.

Those who start college and accumulate student debt but do not earn their bachelor's degree fare the worst – they are 32 percent less likely to be homeowners than high school graduates who did not attend college and do not have student loans. They are also much more likely to report being behind on their student loan payments than those who did obtain at least a bachelor's degree (19 percent versus 6 percent in the survey sample). This population represents 11 percent of the total survey sample of Americans aged 25-44. Looking at a broader period of survey data from 2010-2015, 40 percent of Americans aged 25-44 with student debt have not obtained their bachelor's degree. 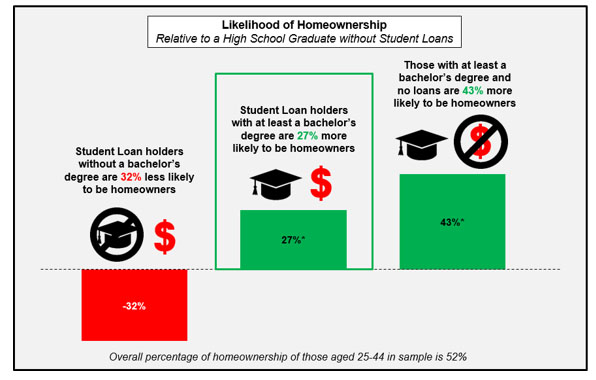 Renters' long-term aspiration to own a home persists whether or not they have student loans, though student loans do seem to delay the expected timeline for first home purchase, as shown in an analysis of renters aged 25-44. Renters with student loans are 28 percent less likely to say they will buy, rather than rent, their next home than those without student loans, when controlling for differences in age, income, and marital status. However, those who expect to rent their next home are only 7 percent less likely to say they plan to buy a home eventually.

On the path to homeownership, obtaining at least a bachelor's degree, on average, has been a good investment, even when financing that education has required student loans. Individual outcomes may vary depending on many factors, such as the type of undergraduate or graduate degree earned, the individual's family or other outside financial support, and personal ability and skill aside from any educational credentials. 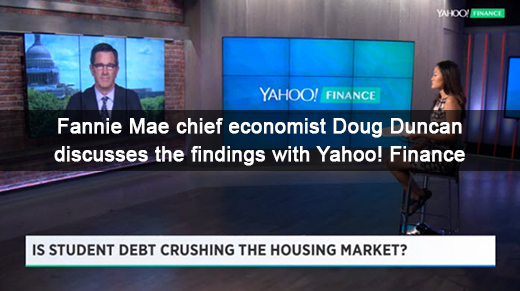 Whether the benefit of earning at least a bachelor's degree will continue to outweigh the negative effect of student loans on homeownership remains to be seen. The massive increase in outstanding student loan debt balances in the U.S. is recent enough that its effect may not yet be fully evident in homeownership rates. In addition, the majority of borrowers in this analysis face monthly student debt repayment burdens of 10 percent or less of their monthly income. If this percentage were to increase in the future, it may lead to a greater negative effect from student loans, regardless of whether individuals earn their bachelor's degree.

Encouraging a higher rate of college completion among those who enroll in higher education may be particularly helpful in mitigating student loan delinquency rates and the lower rate of homeownership for those with student loans.

The authors thank Tom Seidenstein, Steve Deggendorf, Patrick Simmons, Orawin Velz, Hamilton Fout, and Nuno Mota for valuable comments in the creation of this commentary. Of course, all errors and omissions remain the responsibility of the author.