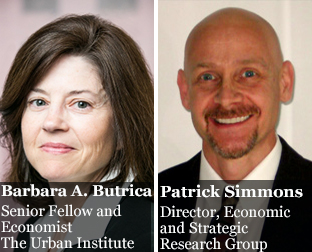 The Baby Boom generation possesses enormous home equity, which by some estimates exceeds $6 trillion.1 Despite this mountain of housing wealth, many Boomers will face financial insecurity in retirement. According to one study, between 30 and 40 percent of Boomers will have insufficient income at age 70 to adequately replace their pre-retirement earnings.2 The extent to which Boomers and preceding generations might be able to draw upon their housing wealth to enhance financial security in retirement hinges on multiple factors, including:

In the first of a series of studies sponsored by Fannie Mae, the Urban Institute examines the potential role of home equity in improving retirement security. Authors Barbara Butrica and Stipica Mudrazija analyze home equity trends among older Americans between 1998 and 2012 using data from the Health and Retirement Study (HRS), a nationally representative survey of older adults. The Working Paper examines how much home equity older households have, the rates at which they tap into that equity, how much housing debt they have, and how these patterns differ over time and across various subgroups.

The paper also estimates the potential role that home equity could play in bolstering retirement security. Although the authors analyze trends for households aged 65 and older, an age group that Boomers had only begun to enter by the end of the study period, their analyses highlight opportunities and challenges that Boomers will likely face in making housing wealth a part of their retirement income strategy.

For most households, a majority of their wealth derives from owning a primary residence, and the authors find that the proportion of households aged 65 and over who own their homes has held up quite well despite the housing bust and subsequent homeownership decline. Whereas the overall homeownership rate has fallen to multi-decade lows in the wake of the housing crisis, the proportion of older adults who owned their primary residence was 78.2 percent in 2012, slightly higher than it was in 1998 or at the peak of the housing bubble in 2006.

Despite a continued high level of homeownership, what sets today’s seniors apart from those of the late 1990s and early 2000s is a higher level of housing indebtedness. The proportion of older homeowners with housing debt jumped from 23.9 percent in 1998 to 35.0 percent in 2012, and the median indebtedness for those carrying home loans nearly doubled during the period. Not only are more seniors carrying housing debt today than in prior years, but their degree of leverage has also increased. The proportion of older borrowers who had loan-to-value (LTV) ratios of 80 percent or greater more than doubled between 1998 and 2012. Furthermore, in 2012, about one in 12 older owner-occupants with housing debt was underwater; that is, the owner owed more on the home than the home was worth.

Despite the rise in housing indebtedness and the decline in home values since the housing downturn, the typical elderly owner-occupant still possesses considerable housing wealth. Median home equity (adjusted to 2015 dollars) for older owner-occupants was $129,000 in 2012—about 20 percent less than at the peak of the housing bubble, but still 10 percent above the 1998 level after adjusting for inflation. Given the increase in home prices since 2012, the home equity positions and LTV ratios among elderly homeowners have likely improved since the end of the study period.

While relatively few older homeowners currently tap their home equity, housing wealth has considerable potential to enhance household finances in retirement. The authors calculate the annuitized value of home equity, net of the cost of renting a home, and find that the typical senior homeowner could have increased her retirement income 40 percent in 2012 by selling her home and annuitizing the proceeds.

Nonetheless, housing wealth has the potential to enhance retirement security substantially among owner-occupants, even for subgroups with modest housing wealth (see Exhibit). Both black and Latino homeowners age 65 and older could increase their incomes by about 40 percent by annuitizing their home equity, a slightly higher proportional boost than non-Hispanic white owners could gain by tapping their housing wealth. However, older black and Latino homeowners would continue to have median incomes dramatically lower than their white counterparts, even after unlocking the wealth in their homes. 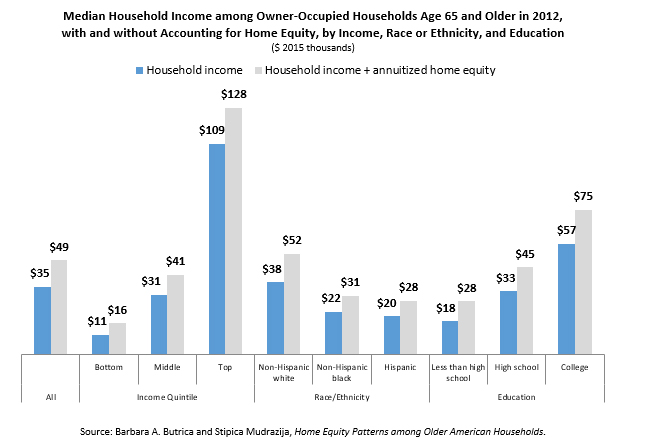 For most adults near traditional retirement age, a home is their most valuable asset, dwarfing retirement accounts, other financial assets, and other nonfinancial assets. Indeed, many retirement security experts argue that the conventional three-legged stool of retirement resources—Social Security, pensions, and savings—is incomplete because it ignores the home.4

Unfortunately, the potential role of owner-occupied housing in enhancing retirement security suffered a setback as home prices plummeted after the housing crisis and have yet to recover fully. Mounting housing indebtedness and increasing leverage among older homeowners also present challenges to using the home as a fourth pillar of retirement security, as growing numbers of retirees need income and assets not only to pay for basic living expenses, but also to service their housing debts. Understanding the implications of these recent trends for the future role of home equity in providing retirement financial security will only become more important as the large Baby Boom generation swells the ranks of retirees over the next two decades.

The authors thank Stipica Mudrazija and the other members of the Urban Institute project research team for their work on this study. The authors also thank Rich Johnson, Pam Blumenthal, and Rolf Pendall for helpful comments on the Working Paper upon which this FM Commentary is based. Of course, all errors and omissions remain the responsibility of the authors.

2 According to the Federal Reserve Board’s 2013 Survey of Consumer Finances, the primary residence home equity of owner-occupants born between 1946 and 1965, a birth cohort sometimes used to define the Baby Boom generation, was $6.3 trillion.

3 Melissa M. Favreault, Richard W. Johnson, Karen E. Smith, and Sheila R. Zedlewski. 2012. Boomers’ Retirement Income Prospects. Washington, DC: The Urban Institute. The authors define retirement income adequacy as income at age 70 that is at least 75 percent of average annual preretirement earnings received from ages 50 to 54. They do not include the annuitized value of home equity in projecting retirement income.

4 This is an upper-bound estimate, as it includes not only home equity loans and home equity lines of credit that have outstanding balances, but also refinancings and home sales, which do not necessarily entail equity extraction.