Opportunities to Improve the Value of Appraisals 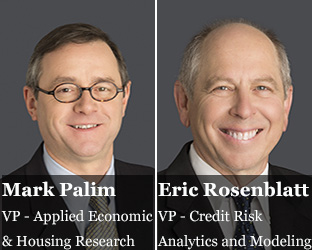 Consumers pay for a property appraisal as part of obtaining a mortgage to finance the purchase of a home. The goal of an appraisal is to provide an unbiased estimate of collateral value that will help creditors and secondary market investors more accurately measure the risk of the mortgage. However, given that more than 90 percent of appraisals value the home at the contract price or higher, it is not clear the extent to which appraisals provide a meaningful check on risk. Additionally, accurate appraisal values should alert borrowers to situations where they have overpaid – with appraisal values below contract price disrupting some deals but also offering homebuyers opportunities to renegotiate to lower prices.

This FM Commentary introduces two papers that consider the issues of appraisal integrity and borrower protection.

For at least two decades, more than 90 percent of appraisals submitted to Fannie Mae have valued homes at or above purchase price as shown in Figure 1 below. For nearly a third of purchases, the appraisals valued properties at exactly the sale price. 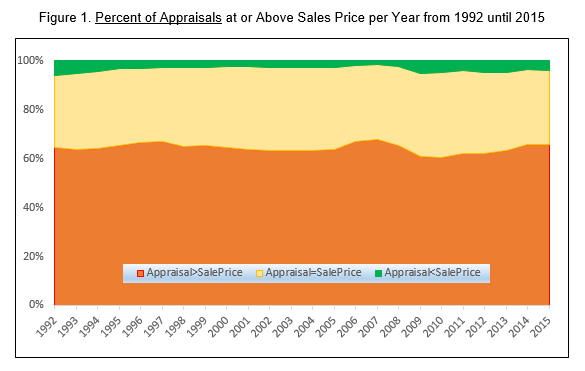 Reforms following the 2008 housing crisis attempted to improve the independence and accuracy of appraisals, and some early research indicated these reforms were marginally successful, with the percent of transactions confirmed falling from a high of 98 percent in 2007 to 94 percent in 2009. Confirmation rates, however, have since drifted back up as we have moved further away from the financial crisis.

In the first paper, Contract Price Confirmation Bias: Evidence from Repeat Appraisals, written in collaboration with Dr. Michael Eriksen, Assistant Professor of Real Estate at the University of Cincinnati, we use a unique data set of residential properties that were appraised twice within 6 months between 2012 and 2015. The first appraisal for each property was done prior to the agreement of a contract price (pre-contract), while the second was done after the agreement and with the knowledge of a contract price agreed on between buyer and seller (post-contract). The following significant differences were found between the two appraisals:

For pre-contract appraisals the selection of comparables, adjustments, and reconciliation generated distributions that were much more symmetrically distributed around the subsequent contract price as shown in Figure 3.

The differences in practices between the two appraisals resulted in the post-contract appraisal opinion of value being on average 4.2 percent higher than the pre-contract appraisal for the identical property, after controlling for differences in the local home price index between when the two appraisals were completed.  Considering the average home price or its relationship to most buyer’s incomes, this is a noteworthy difference.

Appraisals often cost $500 or more, typically paid for by loan applicants who need to prove their collateral is appropriate to support the contract price. This cost should result in an unbiased estimate of value for the borrower. In the second paper, Housing Market Effects of Appraising Below Contract, the authors show that when an appraisal comes in below contract, there is only a modest reduction in the probability of the loan being delayed or failing to close, a rise from the base rate of 25 percent to 32 percent.  What happens instead is that the probability of the borrower renegotiating a lower price increases dramatically from 8 percent to 51 percent.

Thus, if appraised values mechanically confirm the contract price, they may deprive the borrower a chance to renegotiate the sale price. Presumably, most borrowers would want the opportunity to get the house for less, even at a small risk to the deal.

The major policy implication of this research is that further appraisal reform is required. Four suggested changes could enhance the informational value of the appraisal:

Opinions, analyses, estimates, forecasts and other views included in these materials should not be construed as indicating Fannie Mae's business prospects or expected results, are based on a number of assumptions, and are subject to change without notice. How this information affects Fannie Mae will depend on many factors. Although the authors base opinions, analyses, estimates, forecasts and other views on information it considers reliable, it does not guarantee that the information provided in these materials is accurate, current or suitable for any particular purpose. Changes in the assumptions or the information underlying these views could produce materially different results. The analyses, opinions, estimates, forecasts and other views published by the authors represent the views of that group as of the date indicated and do not necessarily represent the views of Fannie Mae or its management.