Mortgage Lenders Opine on How to Best Address the Homeownership Gap 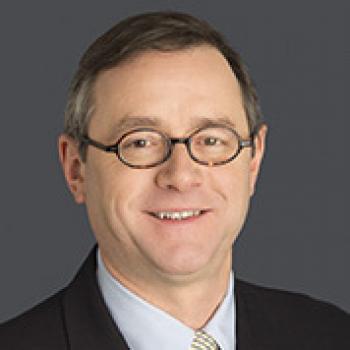 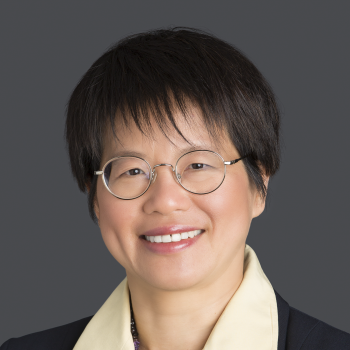 At Fannie Mae, we know that homeownership is one of the most effective ways to improve the financial, social, and emotional well-being of individuals, families, and communities.1 However, for decades, low- and moderate-income people in the United States – a group overrepresented by minorities and people of color, particularly Black people – have struggled to make gains in homeownership.2

Today, the rate of Black homeownership is roughly 30 percentage points lower than it is for white households. This gap has stood firm since the early 1900s and is rooted in historically racist government policies that disadvantaged Black people in America and stymied their ability to build wealth and economic stability. Laws mandating segregation and policies and practices such as redlining prevented Black homebuyers from accessing credit for home and business loans. The result was inequitable access to homeownership and the generational financial rewards accompanying it.

Moreover, housing affordability remains an ongoing challenge for all prospective homebuyers. An insufficient supply of affordable homes for sale and historically high home price growth3 have made homeownership even less attainable in the past few years – particularly so for minority and low- and moderate-income households. As part of Fannie Mae’s efforts to convene conversation around these challenges and other societal issues, we surveyed over 200 senior mortgage executives via our Mortgage Lender Sentiment Survey® (MLSS) to better understand lenders’ views about the modern-day factors contributing to the disparity in homeownership rates, and, importantly, how the housing industry might help.

In response to our survey, mortgage lenders pointed to two market factors in particular that are driving the continuation of the homeownership gap: an insufficient supply of affordable homes for sale and high home price appreciation. Notably, very few lenders cited inflexible underwriting standards or a lack of consumer homeownership knowledge4 as contributing reasons.

Still, most mortgage lenders remain optimistic that the housing industry can effectively address the issue. Lenders most frequently cited down-payment assistance programs and low down-payment mortgage products as the best ways to help close the homeownership gap. They also commonly cited the opportunity for increased consumer education and enhanced support from the GSEs and government agencies. Very few lenders reported standardized property valuation methods (despite growing industry attention to appraisal equity) and post-purchase education to be the most effective options in closing the gap. When prompted to share additional ideas besides those presented in the survey, many lenders pointed to increased marketing and outreach efforts and, consistent with their other responses, increasing the supply of affordable homes.

The survey also asked mortgage lenders to identify industry players that have the greatest potential to address the homeownership gap, and, interestingly, lenders were far from unanimous in their responses. They assigned similar importance to several key industry players, including the federal government, state and local governments, secondary-market participants, and home builders.

Lenders were also largely split on whether closing the homeownership gap is incorporated in their corporate strategies. Slightly over half of the respondents reported that it is. Notably, approximately two-thirds of larger lenders reported this issue as a corporate goal.

Regarding actions lenders are currently taking to help close the homeownership gap, they reported promoting low down-payment mortgages as the most popular activity, followed by offering pre-purchase homeownership education and credit-building programs. Mortgage lenders were least likely to report lowering up-front closing costs as an option.

While lenders pointed to the shortage of affordable housing stock5 as the primary reason why closing the homeownership gap is particularly difficult today, there are many other complex and multi-faceted reasons. Research examining racial disparities in homeownership point to a number of factors, including demographics6, household income and wealth7, geographic location8, credit access9, and biases10, in addition to the lack of affordable housing. Of course, these factors also tend to involve both the public and private sectors, as well as housing and non-housing verticals, further complicating potential solutions.

A decade of low single-family housing starts has contributed to unprecedented home price appreciation, making it much harder for renters to transition to homeownership. Some current market conditions are also contributing to the housing supply shortage, including a lack of existing homes for sale and the slowing of new home construction due to labor market tightness, supply chain disruptions, land unavailability, and stringent zoning regulations. Although many lenders are taking actions to help close the homeownership gap, such as promoting credit-building education and offering low down-payment mortgage products, the lack of affordable housing stock remains an immense challenge – and one that continues to disproportionately impact low- to moderate-income households and communities of color.

The authors thank Katrina Jones, Jaclene Begley, Matt Classick, Nuno Mota, Doug Duncan, and Steven Deggendorf for valuable contributions in the creation of this commentary and the design of the research. Of course, all errors and omissions remain the responsibility of the authors.

Opinions, analyses, estimates, forecasts and other views reflected in this commentary should not be construed as indicating Fannie Mae's business prospects or expected results, are based on a number of assumptions, and are subject to change without notice. How this information affects Fannie Mae will depend on many factors. Changes in the assumptions or the information underlying these views could produce materially different results.

2 While the national homeownership rate hovers around 64 percent, the rate is around 42 and 48 percent respectively for Black and Hispanic households, in contrast with 72 percent among non-Hispanic White households. Additionally, the homeownership rate for households with family income less than the national median household income of $65,000 is around 51 percent, compared with those above the median family income at about 78 percent.
Source: Census American Community Survey 2019 1-year estimates, based on Public Use Microdata Sample (PUMS) file, data with the areas of populations of 100,000+. https://www.census.gov/newsroom/press-kits/2020/acs-1year.html

4 A comparison of online surveys conducted in 2015 and 2018 among a nationally representative sample of over 3,000 respondents shows that consumers continue to overestimate the minimum credit score and down payment necessary to qualify for a mortgage. “Consumers Continue to Overestimate Mortgage Requirements,” released in June 2019, https://www.fanniemae.com/media/19141/display

5 Industry research suggests that growth in housing inventory has slowed over the past decade, after the 2008 housing crisis, creating a gap of 5.5 million and 6.8 million housing units across the country since 2001. According to “Housing is Critical Infrastructure: Social and Economic Benefits of Building More Housing,” prepared by Rosen Consulting Group, released in June 2021, for the National Association of Realtors, while the total stock of U.S. housing grew at an average annual rate of 1.7% from 1968 through 2000, the U.S. housing stock grew by an annual average rate of 1% in the last two decades, and only 0.7% in the last decade. https://cdn.nar.realtor/sites/default/files/documents/Housing-is-Critical-Infrastructure-Social-and-Economic-Benefits-of-Building-More-Housing-6-15-2021.pdf 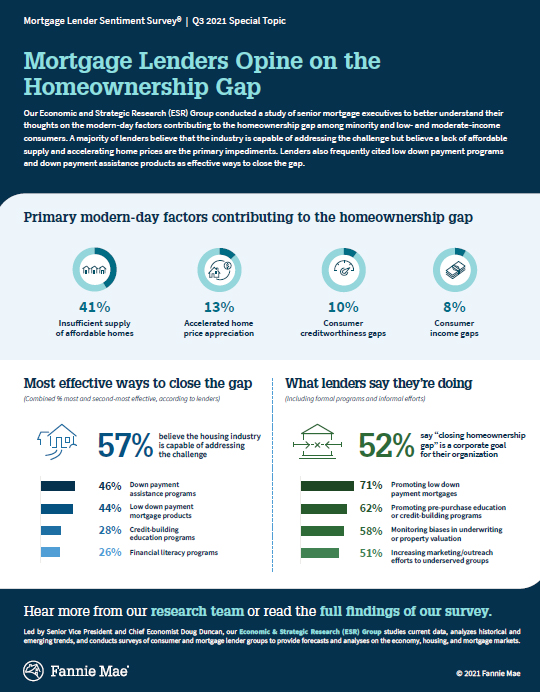 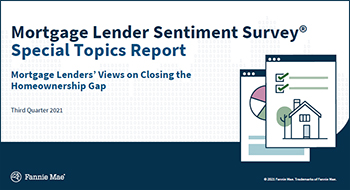