American attitudes regarding the economy, their personal finances, and the housing market are improving and are stabilizing around similar levels seen a year ago, according to data from Fannie Mae’s February National Housing Survey. The pickup in the pace of hiring during the past few months is now translating into greater confidence in the potential for economic upside. The result is a more balanced near-term outlook for the housing market and the economy.

As a result of last summer’s debt ceiling debate in the United States and the ongoing European sovereign debt crisis, economic sentiment and home price expectations dropped sharply during the late summer and early fall. From August 2011 to November 2011, only 16 percent of Americans thought that the economy was on the right track. And, on average, consumers expected home prices to decline from June 2011 through October 2011.

The recent improvement in employment is beginning to ease consumer concerns on a broad range of issues, including personal finances and home prices. In turn, Americans have been growing less pessimistic about the overall direction of the economy. Continuing the streak of increased hiring over the past few months, the February employment report shows significant labor market improvement. Nonfarm payrolls posted a solid increase of 227,000 amid upward revisions totaling 40,000 in prior months. The unemployment rate held steady at a 3-year low of 8.3 percent, despite the jump in the labor force – a positive development. As a result, the share of Americans expecting improvement in their personal finances has recovered to 44 percent in January and February of 2012, approximately the same level as it was a year ago and well above the low of 35 percent seen in July and August of 2011. Home price expectations also have trended into positive territory. As of February, Americans expect home prices to increase by 0.8 percent over the next 12 months, on average. This is the fourth consecutive month of positive home price expectations. Overall, the share of Americans who say the economy is on the right track has increased to 35 percent, the same level as it was a year ago.

Though consumers expect home prices to increase, 50 percent expect no change in today’s record low mortgage rates over the next 12 months, lessening the urgency for potential homebuyers waiting on the sidelines of the housing market. This demonstrates that Americans have heard the Federal Reserve’s pledges to keep interest rates low – February marks the sixth consecutive month in which the share of Americans expecting mortgage rates to stay the same has hovered near the 50 percent mark. If the employment market continues to strengthen and income levels increase, it is unlikely that the Fed will be able to keep its low interest pledge for long.

There remain a lot of economic risks and uncertainties. However, the recent economic data and the improved consumer sentiment seen in the February National Housing Survey are providing a welcome balance between upside and downside risks to the outlook. The data also point to the possibility that a more meaningful housing recovery may not be far behind if consumers are faced with the prospect of rising mortgage rates and home prices amid increased job security. 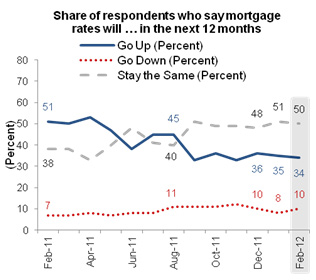