Invisible Equity: Do Homeowners See How Much Home Equity They Are Sitting On? 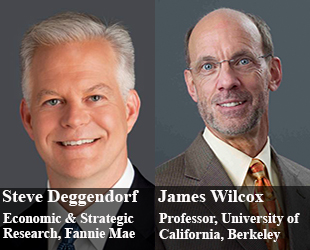 The recovery of housing markets over the past few years through the end of 2014 has been even more halting than that of the economy. Fannie Mae’s Economic & Strategic Research (ESR) group has pointed out that tepid growth of household incomes has likely weighed down housing markets.

Data from Fannie Mae’s National Housing Survey™ (NHS) suggest an additional factor that may be weighing down housing markets: Homeowners may be underestimating their home equityi. In particular, if homeowners believe that large down payments are now required to purchase a home, then widespread, large underestimates of their home equity could be deterring them from applying for mortgages, selling their homes, and buying different homes.

The solid black line in Figure 3 shows CoreLogic’s estimates of the percent of mortgaged homeowners who had total mortgage debt at least 5 percent greater than the value of their homesiv. We refer to these homeowners as having negative home equity or being underwaterv.

Data from the NHS nationally representative sample of U.S. adults allow us to calculate the percent of mortgaged households who perceived that they had negative home equity, i.e., that they were underwater. The NHS asks homeowners how much they are underwater or above water by having them compare their total mortgage debt (the total of their first mortgage, second mortgage, and HELOC balances) to the values of their homes. During NHS telephone interviews, homeowners rely on their perceptions of their homes’ values and their mortgage balances. Unlike respondents to online and mail surveys, NHS respondents have no opportunity to review their personal records or search for data. Presumably, homeowners have or have not acted on the basis of their prevailing perceptions, rather than on perceptions that are revised in light of further consideration of personal or public information.

The NHS offers homeowners a choice of five ranges for their total mortgage debt:

1. At least 20 percent more than the value of your home

2. About 5-20 percent more than the value of your home

3. About the same as the value of your home

4. About 5-20 percent less than the value of your home

5. At least 20 percent less than the value of your home.

Figure 3: Homeowners Who Were Underwater: Estimated vs. Perceived 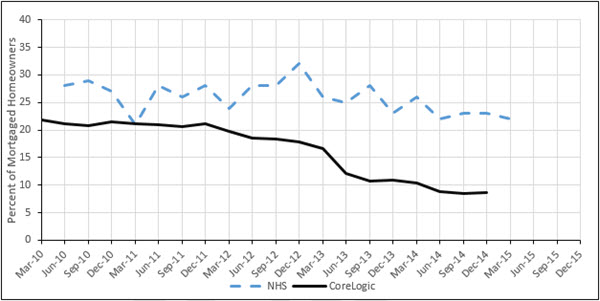 Through the end of 2011, the percent of mortgaged homeowners in the NHS who perceived they were underwater averaged about 6 percentage points more than estimated by CoreLogic. House prices declined on average from the middle of 2007 through the middle of 2011. The 5 ½ percent decline in house prices from Q2 2010 through Q2 2011 was accompanied by little change in both the percent of homeowners who perceived they were underwater and those estimated to be underwater, perhaps due to homeowners continuing to reduce their first- and second-mortgage balances.

The significant increases in house prices between 2012 and 2014, as expected, significantly reduced the percent of homeowners estimated by CoreLogic to be underwater. From the end of 2011 to the end of 2014, the estimated percent more than halved, falling from 21 percent down to 9 percent.

But NHS data paint a strikingly different picture. Figure 3 shows that, despite the 20 percent rise in house prices, approximately the same number of homeowners (23 percent) perceived that they had negative equity at the end of 2014 as those who perceived that they had negative equity before prices rose 20 percent (26 percent on average in 2011). Surprisingly, then, the significant rise in house prices was not perceived to lift many homeowners above water.

The paths of the estimated and perceived percent of homeowners with significant home equity comport with their paths in Figure 3.

Figure 4: Homeowners Who Had Significant Home Equity: Estimated vs. Perceived 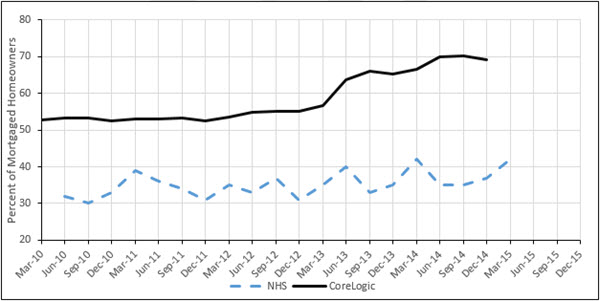 Why Have Estimated and Perceived Home Equity Diverged?

NHS data suggest that homeowners have misperceived recent actual house price changes. During the third and fourth quarters of 2013, the NHS asked homeowners each month whether and how much the values of their homes had gone up or down over the prior 12 months. The national averages of their responses during the third and fourth quarters of 2013 were 2.2 percent and 2.7 percent, respectively. But, the national FHFA home price index shows that, over the prior four quarters, home values actually rose by 8.2 percent and 7.6 percent, respectively. Thus, homeowners seriously misperceived these recent actual house price increases. They perceived only about one-third of the actual percentage increases, in this case implying that, on average, they did not perceive additional home equity equal to 5 percent of their homes’ values.

Not perceiving how much home values, and thus home equity, went up would produce widening gaps, such as those shown in Figures 3 and 4, between estimated and perceived home equity. Discerning whether homeowners’ perceptions caught up with estimated home values or fell further behind rising house prices is problematic. The widening gaps in Figures 3 and 4, however, indicate that homeowners may have increasingly misperceived their gains.

Thus, a "negative perception gap" or an "appreciation gap" may be an important, but removable, impediment in housing and mortgage markets. At the end of 2014, the gap between the estimated and perceived percent of mortgaged homeowners who had significant home equity was 32 (= 69-37) percentage points, which amounts to approximately 15.2 million homeownersvi. Credibly informing an additional 15 million homeowners that they have 20 percent or more equity would remove the appreciation gap and, thus, a perceived, but artificial, barrier that may inhibit many interested homeowners from purchasing another home nearby or from moving to advance their job and career prospects.An Opportunity to Appreciate Appreciation

Providing homeowners with information and with tools so they can better estimate their home equity may help shrink the gap. Delivering easy, affordable access to better estimates of home values (and perhaps of total debts, too) could afford many benefits. Better equity estimates may promote better choices of houses, mortgages, neighborhoods, jobs, spending and saving, and lifestyles.

Online estimates of home values are widely known and freely available. How credible and accurate the currently available estimates are is an open question. Accurate equity estimates require accurate liability, as well as asset, values, and homeowners having affordable access to their mortgage balances. It is hard to know whether homeowners consider their access to be easy and comfortable. Just as homeowners may misperceive the values of their home assets, they may misperceive their mortgage liabilities. If so, those misperceptions might account for some of the appreciation gaps in Figures 3 and 4. As of now, we have no evidence of misperceptions of mortgage balances. But, if substantial numbers of homeowners underestimate amortization, for example, providing them with easy, affordable access to information and tools might be easy and affordable.

Either the private sector or the public sector could provide information and tools to shrink the appreciation gap. Shrinking the gap is geared not to encourage leverage and unsustainable behaviors, but to help homeowners have more accurate estimates of their home equity. Better appreciating how much their assets have appreciated ought to strengthen homeowners’ demand for housing, as well as their demands for other goods and services. Thus, in addition to the opportunity to help homeowners on an individual basis, shrinking the appreciation gap presents a potential opportunity to speed up the recovery of the housing and mortgage markets, better match workers with jobs, and strengthen the economy generally.

v Our most recent data from CoreLogic about underwater homeowners was for Q4 2014.

The authors would like to thank Qiang Cai, Doug Duncan, Tom Seidenstein, and Orawin Velz for their analytical support and feedback.