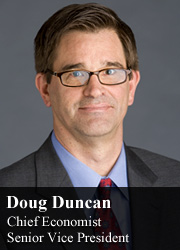 During the past few years, record numbers of American homeowners have gained first or second-hand experience with being “underwater” on their mortgage (when a home is worth less than the amount owed on its mortgage), having the value of their home decline, or even falling into mortgage delinquency. Policy makers on both the state and local levels have taken steps to address the challenges facing these homeowners as part of the housing recovery effort. A deeper understanding of the impact of these experiences on American homeowners’ attitudes can help policy makers and the housing finance industry fine tune these solutions in their efforts to stabilize the housing market.

To conduct this analysis, Fannie Mae’s Economic & Strategic Research group used data from the Fannie Mae National Housing Survey (NHS) collected during the first quarter of 2012. The NHS asks each participant over 100 questions and is the most detailed attitudinal housing survey of its kind.  It polls the adult general population of the United States on a monthly basis to assess their attitudes toward owning and renting a home, house prices, homeownership distress, household finances and overall confidence in the economy.

Historically, it has been difficult for surveys to reach individuals who may be delinquent on their mortgages. For this reason, in the first quarter of 2012, the NHS did a focused oversample of delinquent borrowers, thus making it one of the few surveys that provide high-quality information to assess attitudes of the hard to reach delinquent borrower population.

Fannie Mae’s Economic & Strategic Research group analysis finds that once a borrower becomes delinquent, their attitudes about homeownership, household finances, and paying their mortgage become significantly more negative than the general mortgage population, those who are underwater, and those who have experienced home value declines.

A few data points from the NHS illustrate just how different mortgage borrowers’ attitudes become once they go delinquent. The home has traditionally been the largest source of wealth for most Americans and is seen by many as a form of savings. Those who are underwater or who have experienced home price declines and, as a result, have lost wealth say they have sufficient savings at levels similar to all mortgage borrowers.  In sharp contrast, few delinquent borrowers say they have sufficient savings.

Though both underwater borrowers and those experiencing home value declines have lost equity in their homes, delinquent borrowers are more likely to say it is okay to stop paying their mortgage if a person’s house is now worth less than what they owe on it.

Interestingly, since its inception in January 2010, the NHS has found the attitudes of underwater borrowers are generally similar to the total mortgage borrower population.  This suggests that being delinquent rather than being underwater is a greater factor on one’s attitude toward default.

Implications
The Fannie Mae National Housing Survey has consistently found that the top reasons people indicate they buy a home are non-financial, such as the ability for homeownership to offer control, personal security, and the best environment in which to raise children. Since the underwater and home value decline groups are still experiencing the non-financial benefits they value most, this may help explain why their housing and financial attitudes are similar to those of the general mortgage population.

However, when a mortgage borrower goes delinquent, the consequences, including the possible loss of one’s home, may weaken attitudes, including even the non-financial benefits of homeownership. As the average time in delinquency and foreclosure has increased over the past few years and hit record highs, I believe that helping keep mortgage borrowers current on their mortgage is a beneficial goal since the negative attitudes resulting from delinquency for the borrower (and those they influence) may be hard to repair and could evolve into ingrained delinquency behaviors.