Paying off the mortgage, once a widespread rite of passage for homeowners approaching retirement, has become less common in recent years. Concerns are mounting that the increasing prevalence of housing debt among older homeowners could compromise financial security in retirement by expanding housing affordability problems, crimping essential non-housing spending, increasing vulnerability to home loss through foreclosure, or limiting the accumulation of housing wealth.

These concerns are amplified by the fact that the large Baby Boomer generation, which comprises individuals born between 1946 and 1965 and includes 33 million owner occupants, is reaching retirement age with an elevated likelihood of carrying housing debt. Among the oldest Boomer homeowners, who were age 65 to 69 in 2015, slightly less than 50 percent were mortgage-free, down 10 percentage points compared with Silent Generation homeowners of the same age in 2000.

A new edition of Housing Insights from Fannie Mae’s Economic & Strategic Research Group explores in detail Baby Boomers’ likelihood of owning their homes outright. It adds to the existing literature by investigating whether Boomer homeowners began to extinguish their housing debts more rapidly as the economy emerged from recession. It does so by employing a nontraditional, dynamic method of measuring change called “cohort analysis” that tracks Boomers’ likelihood of owning their homes outright as they grow older, passing from one age group to the next.

Cohort analysis reveals that Boomers attained free-and-clear homeownership at an accelerated pace between 2010 and 2015, a period of economic and housing market recovery (see Exhibit). For example, among Boomer homeowners who aged from 60-64 years old in 2010 to 65-69 years old in 2015, the proportion who owned their homes outright increased by 10.6 percentage points (see bar marked by green arrow in the Exhibit), an increase more than 2 percentage points larger than that experienced by the pre-Boomer cohort passing through the same age range between 2005 and 2010 (bar marked by red arrow in the Exhibit), a period encompassing the Great Recession and credit crisis. Younger Boomer cohorts also experienced substantially larger increases in outright homeownership during the recovery. 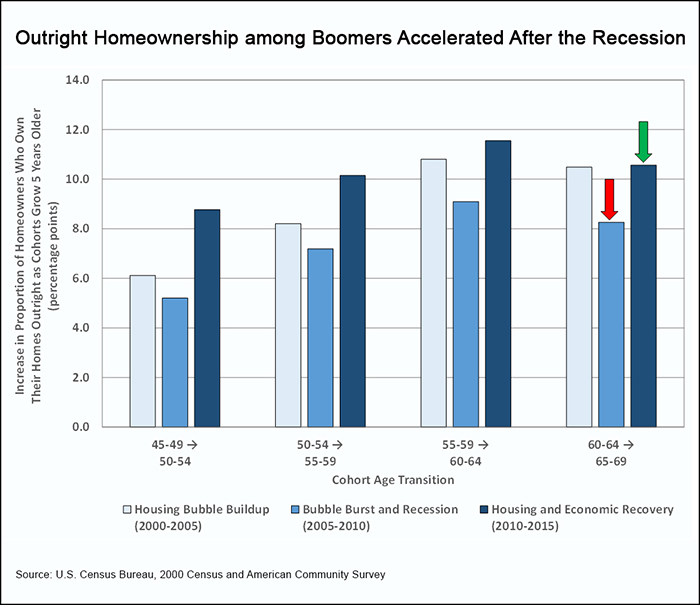 Cohort analysis not only offers a unique perspective on historical change, it also provides a tool for projecting the future likelihood that Baby Boomers will own their homes free-and-clear. Even assuming that the accelerated post-recession gains in free-and-clear homeownership continue, cohort projections reveal that Boomers are unlikely to be mortgage-free at retirement at the same rate as their predecessors. When compared with Silent Generation homeowners who were aged 65 to 69 in 2000, Boomers are projected to experience shortfalls in free-and-clear homeownership at the same age that range from 1.8 percentage points for the youngest Boomers to 10.4 percentage points for the oldest.

The greater propensity of Boomer homeowners to carry housing debt might signal the need to expand consumer outreach and education that helps older mortgagors manage their monthly housing expenses, including ensuring that they have fully exploited opportunities to reduce monthly mortgage payments through refinancing. Educating younger Boomers about options for shorter-duration mortgages that accelerate principal pay-down might also increase the likelihood that they enter retirement with little or no housing debt. For older Boomer mortgagors who wish to eliminate housing debt, an option worth considering is trading down to less expensive homes.

The author thanks Orawin Velz and Mark Palim for valuable comments on the Housing Insights upon which this Perspectives is based. Of course, all errors and omissions remain the responsibility of the author.