The mortgage lending industry is in a state of transition as it adjusts to the rapidly risen interest rate environment, inflationary pressure, and a general slowdown of domestic and global economic growth. Due to mounting affordability constraints for consumers, demand for home purchase and refinance mortgages has declined meaningfully over the past year, a trend that our Economic & Strategic Research (ESR) Group expects to continue through 20231 . Moreover, there's been a significant decline in loan origination profitability in 2022, as average production costs per loan rose to a new high.2 In fact, industry data showed a net loss per loan originated in Q2 2022.2 To help alleviate growing stress to their balance sheets, some mortgage lending firms have announced layoffs or business line closures.

To better understand the business pressures of diminished loan volume and increased origination costs, we leveraged our Mortgage Lender Sentiment Survey® (MLSS) to ask over 200 senior mortgage executives about what's driving changes in loan origination costs, as well as the impact of recent digitization efforts on cost efficiency.

Surveyed lenders cited personnel expenses as the primary factors driving up loan origination costs over the past two years. Further, they noted that investment in digitization was less effective at reducing costs – or in converting them from fixed to variable – even though, for most, it helped improve the consumer experience and reduce cycle time and error rates.

Using the MLSS, we first asked lenders to look back at the past two years and select the top two areas that have driven up the average cost per loan and the top two areas that have driven down the average cost per loan. Lenders reported that personnel-related costs, including back-end operational staff, compliance/legal, and loan officers, were the top areas increasing average loan costs. Digitization investments, including in back-end processing and consumer-facing technology, were the top areas driving down average costs. Looking ahead, lenders anticipate costs associated with consumer-facing technology and compliance/legal to increase the most, followed by marketing and back-end process technology costs. 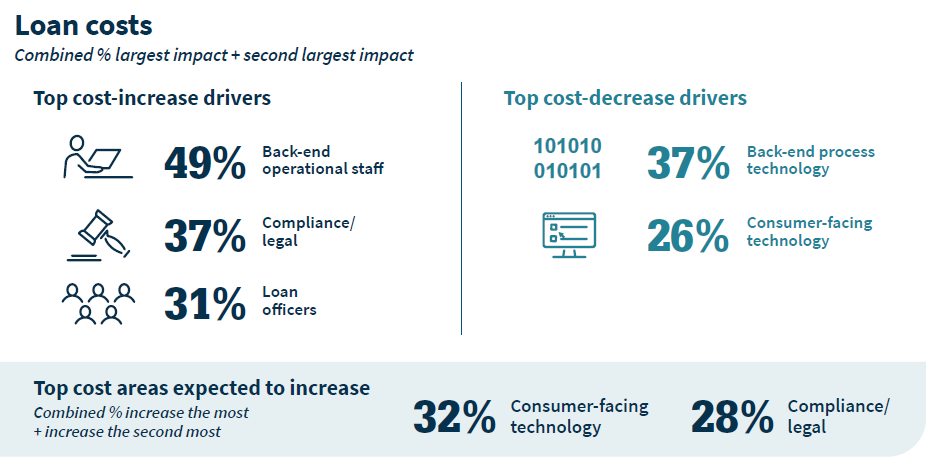 While a large majority of lenders said they've invested in digitization efforts over the past two years, benefits to cost savings were not universally reported. Only 7% of lenders reported "significant" cost savings resulting from digitization efforts, and 52% indicated "some" savings. Larger lenders were more likely to report cost savings than mid-sized or smaller lenders, likely due to their larger scales of economy. Additionally, mortgage banks and credit unions were significantly more likely than depository institutions to say that they invested in digitization for "non-monetary benefits," like indicating such investments may be "table stakes."

We also asked lenders about outsourcing to help manage costs. The survey results suggest that outsourcing is not a common practice in the mortgage lending business, with nearly 80% of lenders reporting that they handle their loan origination process in-house. Moreover, most surveyed lenders said they plan to keep the process in-house. However, among the few lenders who outsource at least a part of the loan origination process, 80% found outsourcing effective at converting fixed costs to variable costs.

Although lenders have invested significantly in digitization over the past few years, lenders reported finding these investments less effective at managing costs. In our view, this is likely because many loan origination costs are fixed. For example, regardless of demand, lenders pay for legal/compliance and technology, the top cost areas that surveyed lenders anticipate will increase the most. Many lenders also pointed out that they invested in technology to meet shifting consumer preferences, and that a positive return on such investment wasn't necessarily the primary goal.

Given lenders' acknowledgment that technology and legal/compliance costs are unlikely to be cut, many appear to be turning to payroll reduction to help manage costs. Employment among nonbanks and mortgage brokers remains relatively high today, compared to the pre-COVID era. With the market experiencing significant declines in loan volume and applications, productivity (in terms of average loan volume or applications per employee) has also dropped significantly, indicating there's potentially excess capacity. Recent news about layoffs, mortgage business closures, and mergers suggest that lenders are scaling back their production employment in response to the cooling housing market. With an industry consensus forecast of a 35% - 50% drop in origination volume in 2022, it's likely that many lenders will continue to right-size capacity to remain competitive.

To learn more, read the research deck or access our infographic.

The author thanks Dan Miller, Tomas Ducaud, Steve Deggendorf, Matt Classick, Ricky Goyette, and Li-Ning Huang for their valuable contributions in the creation of this commentary and the design of the research. All errors remain the responsibility of the author.

For example, the National Association of REALTORS® Pending Home Sales Index, which records contract signings of existing homes and typically leads closings by one to two months, declined one percent to 89.8 in July 2022, the eighth decline in the prior nine months. Year-over-year, pending transactions dropped 19.9%. https://www.nar.realtor/newsroom/pending-home-sales-slipped-1-0-in-july.

New single-family home sales fell 12.6% month-over-month to a seasonally adjusted annualized rate of 511K in July of 2022, the lowest reading since January of 2016, according to the Census Bureau. https://www.census.gov/construction/nrs/pdf/newressales.pdf 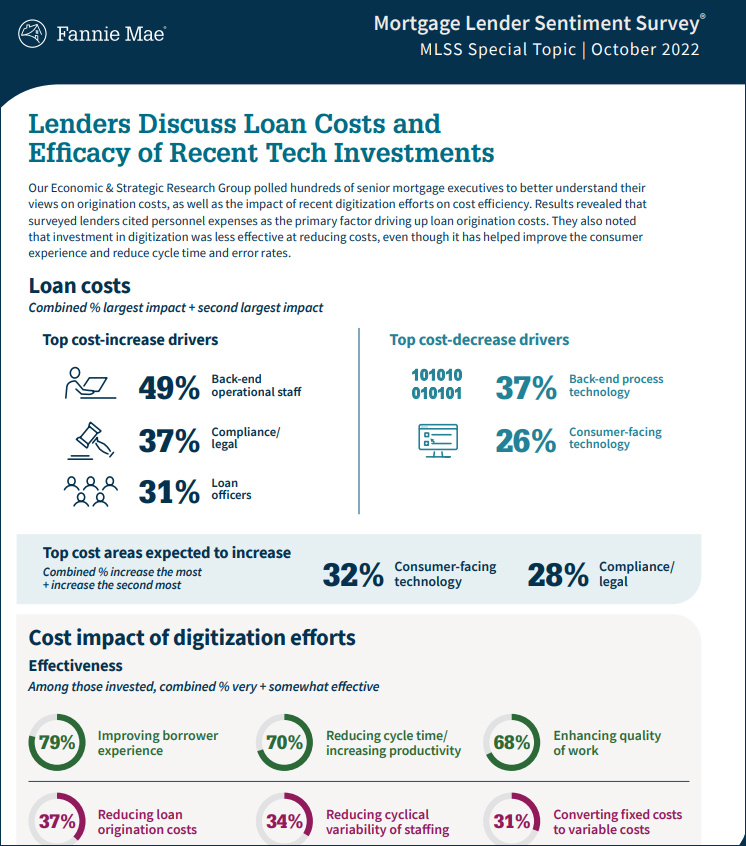