WASHINGTON, DC – For the fourth consecutive quarter, a plurality of mortgage lenders expect near-term profitability to decrease, according to Fannie Mae's Q3 2021 Mortgage Lender Sentiment Survey®. According to the survey, 46% of mortgage lenders believe profit margins will decrease in the next three months, an improvement from 69% in the prior quarter, while 38% believe profits will remain the same and 15% believe profits will increase. Increased competition and changing market conditions were the top reasons cited for the pessimism, while GSE pricing and policies and strong consumer demand were the top reasons given among lenders with a more positive profitability outlook.

"Mortgage lenders appear to have adopted a more neutral posture, reporting to us via the MLSS mixed expectations for purchase and refinance mortgage demand over the next three months," said Fannie Mae Vice President and Deputy Chief Economist Mark Palim. "In the third quarter, more lenders than not reported expectations that purchase mortgage demand will continue to grow, though the total share expecting such growth fell substantially compared to the previous quarter. Meanwhile, a plurality of mortgage lenders expects refinance activity to continue to wane from the highs of the past year and a half – even so, their outlook on likely refi volumes was improved compared to the prior quarter. Of the lenders who expect purchase mortgage demand to decrease in the coming months, high home prices and a limited supply of homes for sale were the primary reasons given – these were also among the top reasons provided by the 63% of consumers who believe it's a 'bad time to buy a home', according to our latest Home Purchase Sentiment Index® result."

"On net, mortgage lenders' profitability outlook improved slightly from last quarter, although more lenders than not continue to expect profit margins to decline in the months ahead," Palim continued. "The primary-secondary spread, an indicator of potential profitability, remains wider than the previous decade's average – a positive sign for lenders – though in August it was at its narrowest since February and 53 basis points below the peak seen in August 2020. While lenders continue to overwhelmingly cite increased competition as their primary concern regarding future profitability, the share citing personnel costs for their diminished profit margin outlook increased significantly, suggesting that mortgage lenders' ability to efficiently manage their workforces will be critical to their bottom lines as competitive pressures remain intense."

Survey Highlights and Other Notes:

In coordination with PSB, Fannie Mae also surveys consumers monthly as part of its National Housing Survey®, of which the Home Purchase Sentiment Index® is derived. In August, while the overall index remained flat, consumers’ perceptions of homebuying conditions compared to home-selling conditions remains polarized. Only 32 percent of consumers reported that it was "a good time to buy" a home, while 73 percent believe it's a "good time to sell." Not surprisingly, two of the top three reasons cited by consumers for their pessimism toward current homebuying conditions were high home prices and a lack of supply. 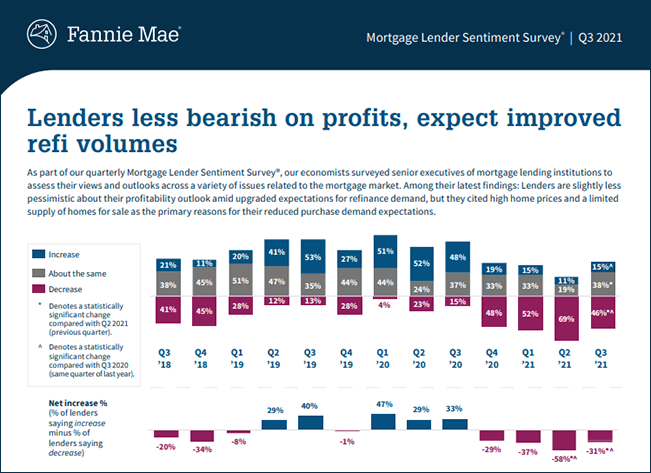