Reported consumer demand in the first quarter was generally mixed compared to the prior quarter, depending on the loan type and timeframe. Reported purchase mortgage demand over the past three months fell for GSE-eligible and government loans but remained flat for non-GSE eligible loans. However, looking ahead to the next three months, purchase mortgage demand expectations rose substantially across all loan types compared to the prior quarter. For refinances, compared to the fourth quarter, most lenders reported that consumer demand fell over the previous three months across all loan types, but they reported slight growth expectations for the next three months.

"Despite continued strong expectations for purchase mortgage demand moving forward, many lenders are signaling caution about their profitability and market competitiveness," said Doug Duncan, Fannie Mae Senior Vice President and Chief Economist. "This quarter, the largest net percentage of lenders in the survey history are expecting a decrease in their profit margin outlook. Those who expected a lower profit margin cited competition from other lenders as the primary reason, reaching a survey high last seen in Q1 and Q2 of 2018, while a market shift from refinance to purchase was cited as the next biggest reason for the first time since Q4 2019."

"Compounding their profit margin concerns, lenders also reported a slow pace of refinance demand," continued Duncan. "With a modestly higher interest rate forecast, we expect refinance activity to gradually wane. The recent rise in the 10-year Treasury yield is putting some upward pressure on mortgage rates. Some lenders commented that for now they are willing to absorb some of these costs to maintain volume. However, in the longer term, continued upward pressures on interest rates would likely dampen home sales and mortgage originations as lenders raise mortgage rates. This, in turn, might push lenders to reduce their production capabilities."

Survey Highlights and Other Notes:

Mortgage spreads continue to compress to below the long-run average

After peaking in April 2020, mortgage spreads narrowed steadily. In February 2021, as the 10-year Treasury increased, the average primary mortgage spread (FRM 30 contract rate versus 10-year Treasury) came in at 155 basis points, below the levels seen prior to the pandemic and below the prior decade's average of approximately 170 basis points. The quick ascent of the 10-year Treasury has already pushed up mortgage rates. The 30-year fixed contract rate broke 3.0% in early March for the first time since last July and we expect mortgage rates to continue a modest climb in the coming months.

For purchase mortgages, the net share of lenders reporting demand growth over the past three months fell from last quarter for GSE-eligible and government loans; however, for GSE-eligible loans, it reached the highest reading for any first quarter in the survey’s history (since Q1 2014). Looking ahead, demand expectations over the next three months rose significantly across all loan types from last quarter and remained similar to the levels seen in Q1 2020.

For refinance mortgages, the net share of lenders reporting demand growth over the prior three months decreased significantly across all loan types from last quarter, reaching the lowest level seen since Q2 2019. Refinance demand growth expectations on net for the next three months ticked up across loan types from the prior quarter (Q4 2020), but remained lower than the peak quarters seen in 2020.

The net share of lenders reporting easing credit standards over the prior three months across all loan types has continued its upward trend, after reaching a survey low in Q2 2020, to a generally neutral stance. For the next three months, the net share of lenders expecting easing has remained flat since recovering from the dip seen in Q2 2020, returning to the pre-COVID-19 level.

In coordination with PSB, Fannie Mae also surveys consumers monthly as part of its National Housing Survey®, of which the Home Purchase Sentiment Index® is derived. In February, a plurality of consumers continued to indicate the belief that it's a good time to buy and sell a home, although both measures have trended downward of late. Consumers also indicated greater confidence in job security, a possible reflection of job-related optimism associated with vaccine mobilization, the expected easing of lockdown restrictions, and upcoming warmer weather. 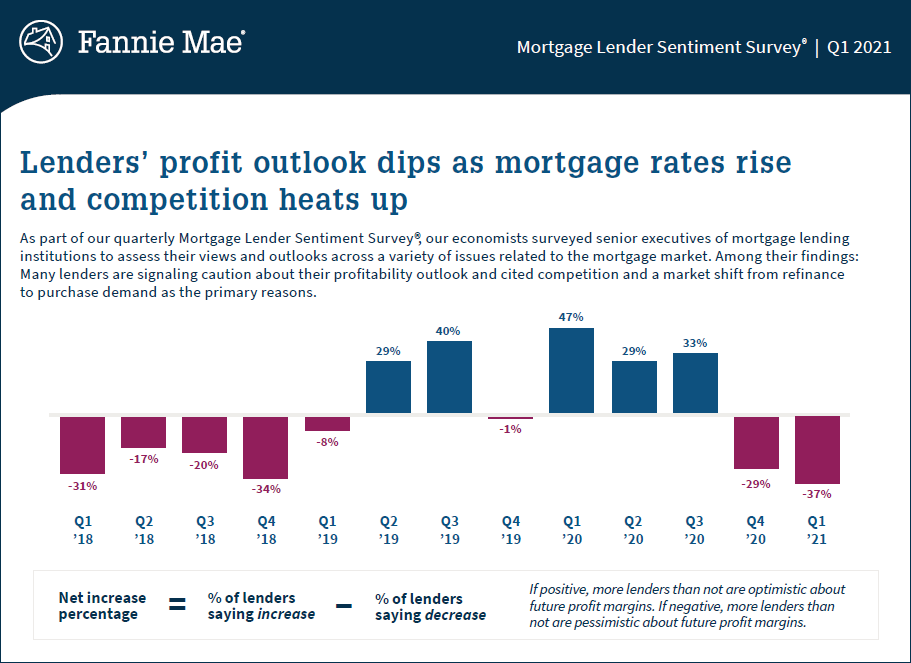