Large lenders’ expectations that underwriting standards will ease over the next three months coincide with overall lenders’ expected pullback in the demand for single-family purchase mortgages, according to results from Fannie Mae’s third-quarter Mortgage Lender Sentiment Survey. The share of lenders who expect purchase mortgage demand to go up over the next three months decreased significantly – between 26 to 33 percentage points depending on loan type – with the largest decline of 33 percentage points on GSE-eligible loans. Among those surveyed, larger lenders continue to be more likely than their smaller counterparts to say they expect to ease their credit standards during the next three months, in particular for non-GSE-eligible and government loans, perhaps indicating an effort to boost purchase mortgage activity before the year comes to a close.

"Lenders' diminished purchase mortgage demand outlook is broadly in line with the softened consumer housing sentiment seen in the August National Housing Survey results released last week," said Doug Duncan, senior vice president and chief economist at Fannie Mae. "Historically, as lenders face a more competitive market for loan volume, it's not uncommon to see some loosening in the lending standards; however, this time, the easing will likely be around the edges." These latest third quarter results are largely consistent with Fannie Mae’s study released last month, titled "Impact of QM," that shows larger lenders are more likely than smaller lenders to pursue non-QM loans. "Larger lenders are expecting to tap into the non-GSE-eligible and government loan market to maintain or grow their market share and offset their anticipated slowing mortgage demand as the peak spring/summer selling seasons are coming to an end," said Duncan. 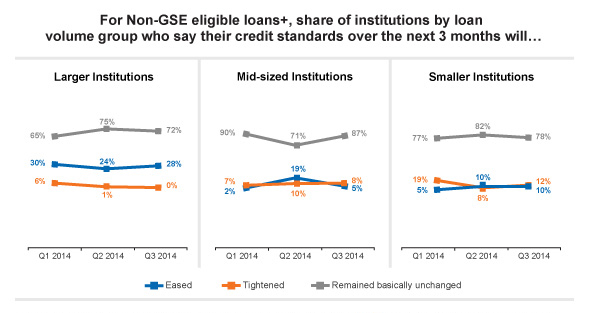 On this webpage you will find a news release with highlights from the survey results, the Q3 2014 data summary highlighting key attitudinal indicators, a detailed research report, a podcast containing highlights from this quarter’s survey, FAQs providing additional information about the survey, and the questionnaire used for the Q3 survey.