Mortgage lenders have reported a net negative profit margin outlook for the sixth consecutive quarter, matching the all-time low reading from Q4 2016, according to Fannie Mae’s Q1 2018 Mortgage Lender Sentiment Survey®. Those who expect a lower profit margin continued to point to “competition from other lenders” as the primary reason, which set another new survey high for the fifth consecutive quarter, while “market trend changes” were cited as the next biggest reason for the first time in three quarters. 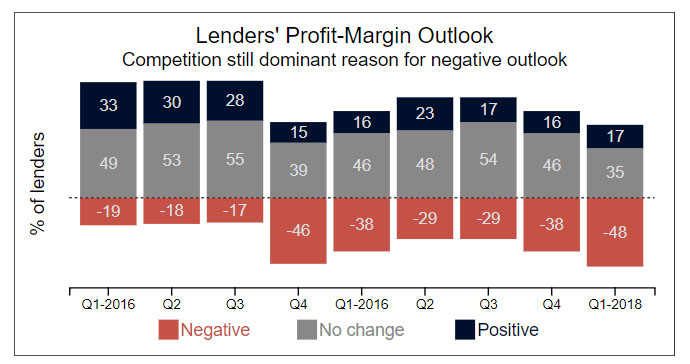 Compounding their profit margin concerns, more lenders also have a negative view of consumer demand for purchase and refinance mortgages. The net share of lenders who reported growth in purchase demand over the prior three months was negative for the first time in four years, falling to the lowest reading since Q1 2014. Those who had positive demand expectations over the next three months declined to the lowest first-quarter reading since the survey began. Lenders also continued to report a downbeat outlook with regard to refinance demand over the prior three months and next three months.

"Lenders have faced an increasingly difficult market environment, as they report the most sluggish refinance demand expectations in more than a year, the most anemic purchase demand outlook on record for any first quarter, and the worst profit margin outlook in the survey’s history," said Doug Duncan, senior vice president and chief economist at Fannie Mae. "Despite the pressures to remain competitive and profitable, signs of lender caution appear to be emerging. While more lenders eased lending standards than tightened them, continuing the trend that started more than three years ago, the net share of lenders reporting easing credit standards declined for the first time in five quarters to the lowest level in a year."

On this webpage you will find a news release with highlights from the survey results, the Q1 2018 data summary highlighting key attitudinal indicators, a detailed research report, the questionnaire used for the Q1 2018 survey, and FAQs providing additional information about the survey.