Mortgage lenders remain optimistic about purchase mortgage demand and their profit margin during the next three months, according to Fannie Mae's second quarter 2015 Mortgage Lender Sentiment Survey™. Conducted in May, the survey shows that lenders’ near-term outlook for both purchase demand and profit margin remains at high levels, and above the 2014 survey results. Additionally, more lenders have continued to report credit loosening than tightening.

"This quarter’'s results showed that the growing optimism of lenders has been rewarded," said Doug Duncan, senior vice president and chief economist at Fannie Mae. "The share of lenders reporting increased purchase mortgage demand over the prior three months reached a survey high for both GSE-eligible and government loans. At the same time, the positive gap grows between lenders reporting loosening or maintaining existing credit standards, relative to those reporting tightening. While not matching first quarter 2015 levels, the profit margin and purchase mortgage demand expectations over the next three months remain above the 2014 readings. The results, when taken together with the continued positive trend in consumer attitudes shown in the recently released National Housing Survey™, reinforce an increasingly optimistic outlook for housing in 2015, consistent with our forecast. We expect a continued housing expansion in 2015 after an uneven and disappointing 2014." 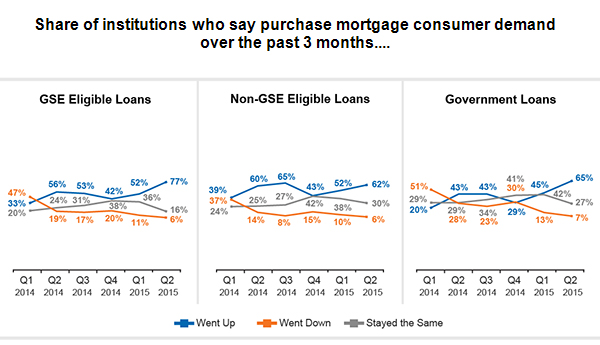 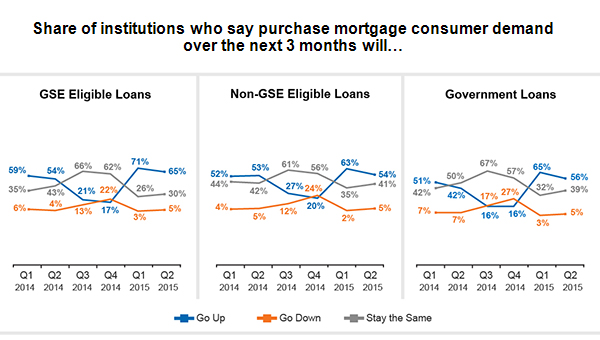 On this webpage you will find a news release with highlights from the survey results, the Q2 2015 data summary highlighting key attitudinal indicators, a detailed research report, the questionnaire used for the Q2 2015 survey, and FAQs providing additional information about the survey.