Fewer mortgage lenders are reporting tighter credit while weak consumer demand is increasingly cited as driving lenders’ decreased profit margin outlook, according to results from Fannie Mae’s fourth quarter 2014 Mortgage Lender Sentiment Survey™. Conducted in November 2014, the survey shows that for GSE-eligible loans, the share of lenders who say they have tightened their credit standards during the prior three months has gradually trended down this year, decreasing to 13 percent in the fourth quarter compared to 28 percent in the first quarter. For non-GSE-eligible loans, more lenders reported easing than tightening of credit standards for the second consecutive quarter. Despite this, consumer demand reported for single-family purchase mortgages over the prior three months declined significantly from Q3 to Q4, and the share of lenders expecting demand to go down during the next three months has climbed, supporting expectations that the housing market will continue to grind its way upward next year.

“The increased share of lenders who reported easing of credit standards could be associated with Fannie Mae and Freddie Mac releasing updated guidelines to their representations and warranties frameworks, intended to provide lenders with greater certainty and clarity around potential repurchase risk. These efforts indicate industry endeavors to boost housing activities by making mortgages available to more borrowers,” said Duncan. “We believe that some combination of easing of credit standards, relatively low mortgage rates, and ongoing labor market improvements will help the housing market to grow steadily, albeit modestly, in 2015.” 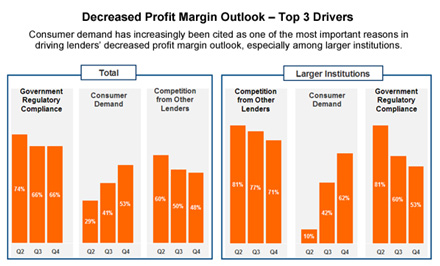 On this webpage you will find a news release with highlights from the survey results, the Q4 2014 data summary highlighting key attitudinal indicators, a detailed research report, the questionnaire used for the Q4 survey, and FAQs providing additional information about the survey.