WASHINGTON, DC – Americans continue to show growing confidence in home price increases over the next 12 months, providing further indications of a slow but steady housing recovery, according to results from Fannie Mae’s October 2012 National Housing Survey. Taken together with rental price expectations, which surged in October and remain much higher than home price expectations, more consumers may be motivated to purchase a home in the coming months.

“This has been a year of steady growth in the percentage of consumers with positive home price expectations,” said Doug Duncan, senior vice president and chief economist of Fannie Mae. “Increasing household formation, encouraged by an improving labor market, is adding additional momentum to the housing recovery and putting upward pressure on rental price expectations. Expected increases in both owning and renting costs may encourage more consumers to buy and add further strength to the housing recovery already under way.” 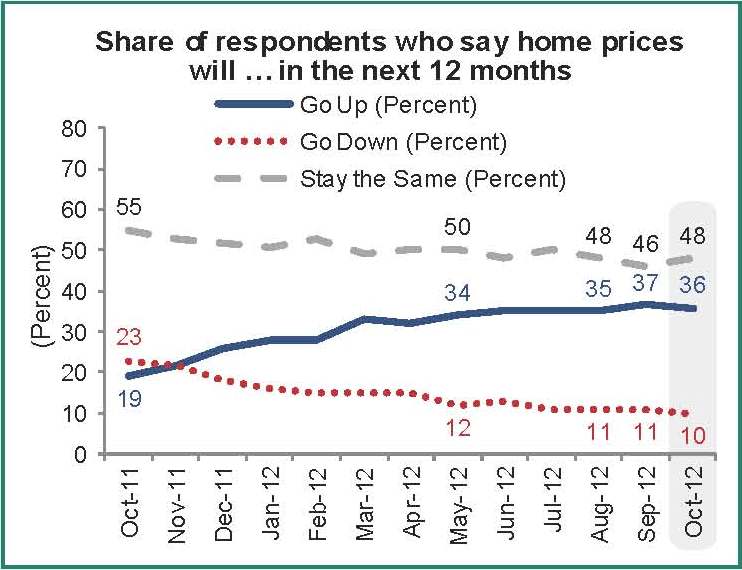 Continuing the positive upward trend seen over the past year, survey respondents expect home prices to increase an average of 1.7 percent in the next 12 months. The share who say home prices will decrease in the next year dropped to 10 percent – 13 percentage points lower than October 2011 and the lowest level since the survey’s inception in June 2010. Additionally, the positive difference between those saying home prices will go up and those saying they will go down remained steady at a survey high of 26 percentage points. The percentage who believe mortgage rates will go up climbed 4 percentage points to 37 percent following a steep drop in September. Returning to the July 2012 level, respondents’ average rental price expectation jumped by 0.8 percent to 3.9 percent, and 50 percent believe home rental prices will rise in the next year – a 3 percentage point increase over last month and the highest level since the survey began.

When asked about the state of the economy, the share of respondents who say it’s on the right track dropped to 38 percent, down 3 percentage points from last month. Conversely, those who say the economy is on the wrong track climbed 3 percentage points to 56 percent. The share of consumers who expect their personal financial situation to get better or stay the same over the next year remained essentially level at 43 percent and 40 percent, respectively.

The Economy and Household Finances

The most detailed consumer attitudinal survey of its kind, the Fannie Mae National Housing Survey polled 1,001 Americans via live telephone interview to assess their attitudes toward owning and renting a home, home purchase and rental price changes, homeownership distress, the economy, household finances, and overall consumer confidence. Homeowners and renters are asked more than 100 questions used to track attitudinal shifts (findings are compared to the same survey conducted monthly beginning June 2010). Fannie Mae conducts this survey and shares monthly and quarterly results so that we may help industry partners and market participants target our collective efforts to stabilize the housing market in the near-term, and provide support in the future.

For detailed findings from the October 2012 survey, as well as a podcast providing an audio synopsis of the survey results and technical notes on survey methodology and questions asked of respondents associated with each monthly indicator, please visit the Fannie Mae Monthly National Housing Survey site. Also available on the site are quarterly survey results, which provide a detailed assessment of combined data results from three monthly studies. The October 2012 Fannie Mae National Housing Survey was conducted between October 4, 2012 and October 25, 2012. Interviews were conducted by Penn Schoen Berland, in coordination with Fannie Mae.

Fannie Mae exists to expand affordable housing and bring global capital to local communities in order to serve the U.S. housing market. Fannie Mae has a federal charter and operates in America's secondary mortgage market to enhance the liquidity of the mortgage market by providing funds to mortgage bankers and other lenders so that they may lend to home buyers. Our job is to help those who house America.