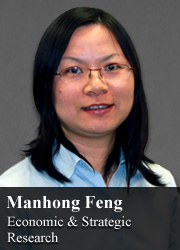 Recovery from the Great Recession has been very slow, hindered by sluggish consumer spending and income growth. Earnings from employment has an important effect on both incomes and consumer spending. In the latest issue of Housing Insights, Fannie Mae’s Economic & Strategic Research Group examines changes in average and aggregate earnings during the Great Recession and subsequent recovery, investigates the extent to which changes in employment and average earnings within industries have affected overall earnings growth, and compares recent trends with prior business cycles.1

Aggregate earnings, which sum earnings across all employees, paint a very different picture. Real aggregate earnings declined sharply during the Great Recession and have yet to regain pre-recession levels three years into the recovery—the worst performance in the last five business cycles, with the exception of the early 2000s recession (see bottom chart below).

Average earnings have recovered from the Great Recession, but aggregate earnings continue to languish. (Earnings from beginning of recession through three years of recovery.)

Both the number of workers and average earnings per worker affect aggregate earnings. To precisely quantify the relative effects of employment and average earnings on aggregate earnings trends, this analysis uses a decomposition technique that separates the effects of employment changes within industries (the “employment effect”) from the effects of average earnings growth within industries (the “earnings effect”). The analysis reveals that the sharp decline in aggregate earnings during the Great Recession was completely attributable to job losses that were only partially offset by continued average wage increases for people who did not lose their jobs (see chart below). In the three years since the Great Recession ended in June 2009, real aggregate weekly earnings have only partially recovered from the decline suffered during the downturn, with the earnings effect and the employment effect accounting for 43 percent and 57 percent of the gain, respectively. When considered over the entire course of the current cycle (from December 2007 through June 2012), the employment effect is responsible for a loss of nearly three billion dollars in weekly earnings and has accounted for a far larger hit to aggregate earnings than during the four previous business cycles. 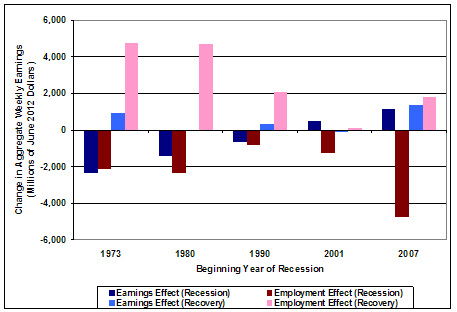 As the earnings effect has improved in recent downturns, job loss has come to dominate aggregate wage declines during recessions. 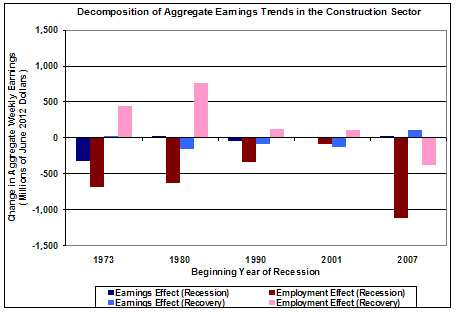 Construction job losses have been a major drag on aggregate wages during both the Great Recession and subsequent recovery.

Within the construction sector, declining homebuilding activity has been a major force behind falling employment, as the residential subsector has accounted for 53 percent of the total construction employment decline since December 2007.2 While homebuilding activity (single-family and multifamily starts) appears to have reached bottom in 2009, we believe its recovery will continue to be gradual and uneven. As the economy works off the imbalances of the housing bubble, we expect that it will likely take years before construction activity rebounds to a more “normal” level consistent with sustained rates of household formation, housing demolition, and demand for second homes. In the meantime, it appears that weakness in construction employment will continue to restrain the recovery in aggregate earnings and impede a robust economic expansion.

Opinions, analyses, estimates, forecasts and other views of Fannie Mae's Economic & Strategic Research (ESR) group included in this commentary and related Housing Insights should not be construed as indicating Fannie Mae's business prospects or expected results, are based on a number of assumptions, and are subject to change without notice. How this information affects Fannie Mae will depend on many factors. Although the ESR group bases its opinions, analyses, estimates, forecasts and other views on information it considers reliable, it does not guarantee that the information provided in these materials is accurate, current or suitable for any particular purpose and this information does not constitute investment advice. Changes in the assumptions or the information underlying these views could produce materially different results. The analyses, opinions, estimates, forecasts and other views published by the ESR group represent the views of that group as of the date indicated and do not necessarily represent the views of Fannie Mae or its management.

1 See the September 2012 issue of Housing Insights for an explanation of the types of employment covered in the analysis and for definitions of business cycles and earnings. This article uses the terms “earnings” and “wages” interchangeably.