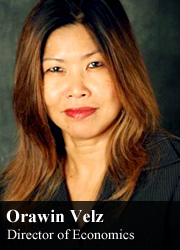 Over the past several years, millions of homeowners have refinanced their mortgages, taking advantage of lower mortgage rates. For many, refinancing lowers their monthly mortgage payment, freeing up cash that can be used for other goods and services. Given a modest economic expansion, a gradual and uneven improvement in the labor market, and weak income growth, mortgage refinancing is viewed as one of the most important ways to help relieve financially-stressed households and at the same time help boost economic activity. However, many homeowners have not been able to take advantage of record low mortgage rates because of several impediments, which led to new programs designed to ease some of those hurdles.

This commentary presents a brief summary of behaviors of refinancers, based on recent data from Fannie Mae portfolios, showing how the motivation to refinance and the preference of new loans have changed over time through different periods of refinance booms. It also outlines recent debates surrounding the issue of whether refinancing is an effective tool to stimulate the economy.

Since December 2011, the yield on 30-year fixed-rate conforming mortgages has been below four percent every week except one, according to Freddie Mac’s Weekly Primary Mortgage Market Survey. Ongoing historically favorable interest rates have extended the refinance wave that started in 2009 into this year. Intensified concerns over the European sovereign debt crisis brought rates down to record lows by late May, continuing to fuel refinance activity.

Between 2009 and 2011, Fannie Mae refinanced over six million mortgages, which made up 78 percent of the loans that we purchased or guaranteed.

Despite mortgage rates declining to record lows, the ongoing refinance boom does not rival the earlier boom of 2003. Low rates alone are not enough to trigger a massive refi boom, as borrowers continued to face various impediments:

Mortgage refinancing is one of the channels through which declining interest rates can help boost economic activity. Some of the freed-up cash flow could be saved or could be used to pay off existing debt. While repaying an existing debt does not immediately help spur the economy, it allows households to continue to repair their damaged balance sheets, positioning them for a stronger spending growth path later on, and cushioning them against future shocks.

Because fixed-rate refinancing essentially acts as a permanent tax cut, some advocate that the government should help more homeowners refinance their mortgages by reducing the number of impediments they face. The Home Affordable Refinance Program (HARP) is intended to help borrowers with negative equity by addressing some of those hurdles, such as loan level pricing adjustments, put-back risk, second liens, and the unavailability of private mortgage insurance. The program, which is limited to pre-June 2009 originations, attempt to help borrowers who could probably take advantage of a sizable rate decrease and reduce their monthly payment burden.

Reducing the monthly mortgage payment is not the only motive to refinance. There are other incentives, such as tapping equity in the home and reducing the term of the mortgage. During the housing boom, millions of homeowners took advantage of relatively low mortgage rates as well as rising home prices to take out some of the equity they accumulated in their homes. They borrowed more than they needed to pay off their former mortgage and cover the transaction costs of the refinancing.

In industry terminology, they completed a cash-out refinancing. And they used the extra cash to purchase goods and services and other assets, or repay other debt. The stimulative impact on the economy from cash-out refinancing is significantly greater than that for refinancing for the sole purpose of reducing the monthly mortgage payment.

Given the massive decline in home prices and home equity since the financial crisis, cash-out refinancing activity has contracted sharply. Fannie Mae acquisition data show that, over the past three years, the cash-out refinance volume of loans has declined significantly, while refinances where no cash is taken out have increased substantially (Chart 1). 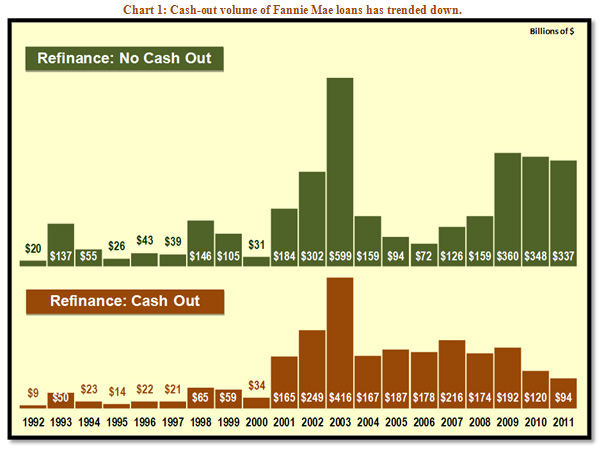 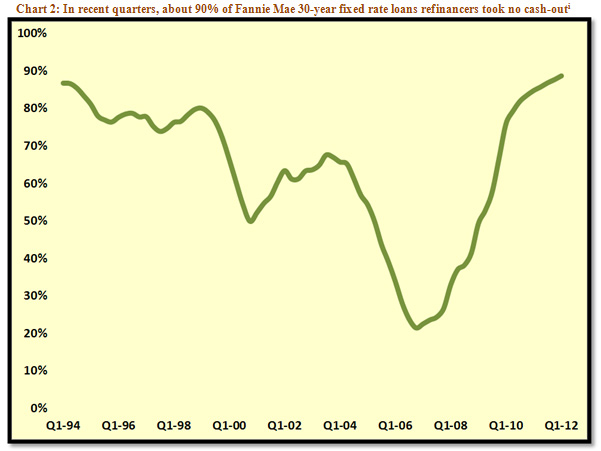 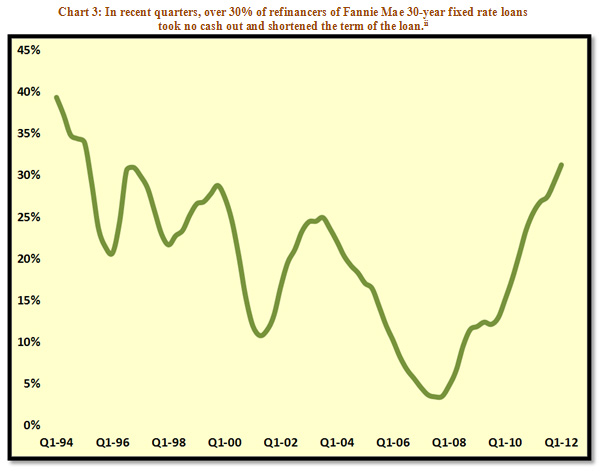 Even if a large-scale refinance program is introduced, some critics argue that its stimulative impact will likely be limited because losses to investors in mortgage-backed securities (MBS) stemming from their reduced income would offset any gain to homeowners.iii In addition, these critics argue that a refinancing wave caused by a government policy that transfers wealth from investors to borrowers will deter investors from buying MBS in the future and could potentially dry up available capital for mortgages and push mortgage rates higher.

Others disagree, however. For example, an analysis from the Federal Reserve Bank of New York argues that the benefit of refinancing to consumers far exceeds the effect of lost returns to investors who provide the financing. This is because:

Given the breadth of issues surrounding refinancing, the net benefit of a grand scale program on the economy has been the subject of a great deal of debate. Proponents such as Glen Hubbardv argue that large scale streamlined refinance programs allowing every homeowner with GSE, FHA and VA mortgages to refinance at four percent may benefit up to 30 million borrowers, leading to possible savings of $70 billion per year in lower mortgage payments. Other research yielded smaller benefits, ranging from less than eight billion dollars to nearly $60 billion.vi

While it is impossible to know exactly what the macroeconomic impact of a large scale refinance program on the economy would be, it is true that refinancing activity over the past several years has helped substantially in bringing down households’ debt service burden, which is one gauge of household financial health. According to Fannie Mae data for the first quarter of 2012, the median mortgage rate reduction for a 30-year fixed-rate mortgage was about 1.4 percentage points, which provides a savings of about $2,200 during the first year on a $220,000, 30-year fixed rate loan.vii

The author thanks Yang Hu for providing data from Fannie Mae portfolios.

i Refinances with no cash out as a share of the total count of Fannie Mae loan refinances (includes only loans in Fannie Mae portfolio that were prepaid and refinanced into another Fannie Mae loan). Four quarter moving average.

iv Joseph Tracy and Joshua Wright, Why Mortgage Refinancing Is Not a Zero-Sum Game, The Federal Reserve Bank of New York, January 11, 2012.

v Dean of the Columbia University Graduate School of Business and former chairman of the Council of Economic Advisors under President George W. Bush.

vii $220,000 was the average refinance loan amount in the first quarter of 2012, according to the Mortgage Bankers Association Weekly Mortgage Applications Survey.