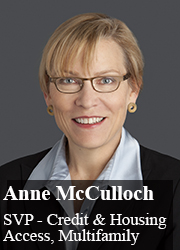 Ten years ago, Hurricane Katrina hit New Orleans and the Gulf region with devastating force. The storm set off a long process of recovery and rebuilding that continues to this day, driven by the commitment and courage of the people of the Gulf.

When the storm hit, Fannie Mae employees reacted with the kind of spirit and dedication that I’ve come to know well over my career here. I saw first-hand how employees of a mission-driven company can have a deep and profound impact. And, I saw how communities who had been brought to their knees can get back up again, even if it takes a while.

Less than two months after the storm I traveled to New Orleans with a group that included our then-chairman and CEO. We visited with and listened to local officials across the Coast and walked through neighborhoods. Our guide was Tim Carpenter, the head of Fannie Mae's local office. His house on the North Shore of Lake Pontchartrain had lost its roof and chimney, while his family in Mississippi had their homes destroyed. The devastation was overwhelming, but Tim and the team stepped up, as did the residents and community leaders of the Gulf.

We worked together to help people rebuild their homes and their lives. We offered our expertise, giving more than 12,000 hours of technical and strategic planning assistance to our lender and community partners in the Gulf. More than 1,400 Fannie Mae employees traveled to the region to volunteer in recovery efforts and contributed over 21,000 volunteer hours.

In one day alone, our Single-Family and Multifamily customer engagement teams built six playgrounds—mixing 868 bags of concrete, moving 1,900 wheelbarrows of safety surfacing, and installing 109 new pieces of play equipment—to create new community spaces in neighborhoods that had lost all the normal places where people gather.

There are so many wonderful stories from that time. We participated in an impromptu Second Line parade behind a local brass band that came to inspire us as we volunteered, ate red beans and rice in a neighborhood canteen before there was anywhere to buy food, and talked with families who had lost everything but had joined together to open a neighborhood school so their children could come home. We met so many people who had a deep and lasting impact.

In those early days after storm, we also made important business choices, including funding loans after the storm on closings that had occurred before the storm, even when we didn't know if the buildings still existed. Our lender partners needed the liquidity to stay open and we answered the call.

Fannie Mae accepted pre-Katrina appraisals immediately after the storm when there were no comparable sales available. We sent a 12-person special loss mitigation team to the region as soon as they could get into the neighborhoods and that team worked seven days a week to assess the damage on more than 36,000 properties. We allowed our lenders to provide mortgage forbearance in the affected areas for up to 18 months and then offered loan modifications to help avoid payment shock when families began to repay their mortgages.

Since Katrina, Fannie Mae has been an important source of mortgage financing as the region has worked its way back. In New Orleans alone, we've acquired nearly 92,500 single-family loans since 2005, with $8.5 billion of loans on our books as of June 2015.

Fannie Mae has provided $2.9 billion in multifamily financing to the Gulf region since 2005, double what had been provided in the 10 years prior to Hurricane Katrina. This financing supports over 400 rental properties with over 65,000 units. Recently, the first multifamily loan we financed in the New Orleans area after Katrina was successfully refinanced so that the building can continue to provide good, safe rental housing for working families.

I've continued to volunteer in New Orleans and go to the Gulf Coast twice a year. I see the neighborhoods we touched, the rental housing built with our tax credit investments, the institutions we supported and the strong local partners we worked beside. There are certainly many challenges that remain in New Orleans and throughout the Gulf, but it is inspiring to see the region getting stronger all the time.