Mortgage Rates and the Housing Recovery – A Year Later 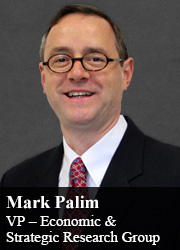 It has been a year since mortgage rates reached a post-crisis low of 3.35 percent at the beginning of May 2013.1 Mortgage rates then rose steadily through the summer of 2013, reaching 4.57 percent in September 2013. More recently, rates have oscillated in a relatively narrow range down to 4.10 percent. For the week of June 20, 2014, rates stood at 4.17 percent. Naturally, the question of what impact this has, and will have, on the housing market is of interest to consumers, other market participants, and policymakers.

Historical Relationship and Prior Forecast

Based on these past experiences, we suggested that rising rates were more likely to lead to a slowdown in home purchases rather than a decline in prices. Furthermore, we noted that while in the past a sharp increase in rates on fixed-rate mortgages led to an increase in origination of adjustable-rate mortgages (ARMs), in this instance, a recent regulatory change, the Qualified Mortgage (QM) Rule, would likely mute that response. 2

Were we right in our July 2013 assessment? We now have home price and sales data through April 2014. The general pattern is consistent with historical relationships and our expectations in July 2013. Namely, that a sharp adjustment to higher mortgage rates tends to precipitate a reduction in the volume of sales rather than a decline in prices. 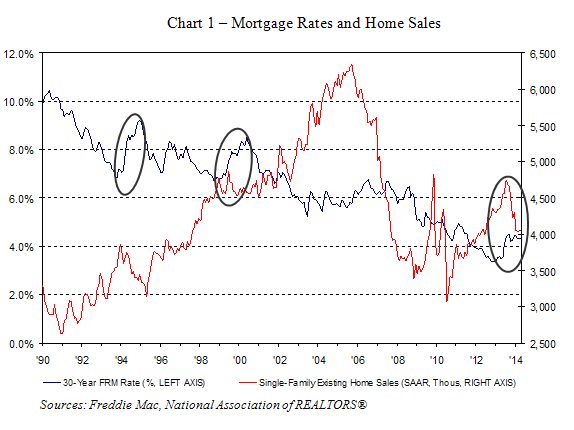 In April 2013, prior to the onset of the current rise in mortgage rates, national home prices were rising at an annual rate of 11.3 percent, as measured by CoreLogic. Contemporaneous readings from the S&P/Case-Schiller and the FHFA price indices confirmed the strong pace of home price appreciation. Since April 2013, home prices have continued to rise, but are no longer accelerating (see Chart 2). The year-over-year change in home prices in April 2014 was 10.5 percent having peaked at 11.9 percent in February 2014 (CoreLogic HPI). The continued strong appreciation in home prices occurred during a period when mortgage rates rose by 80 basis points. 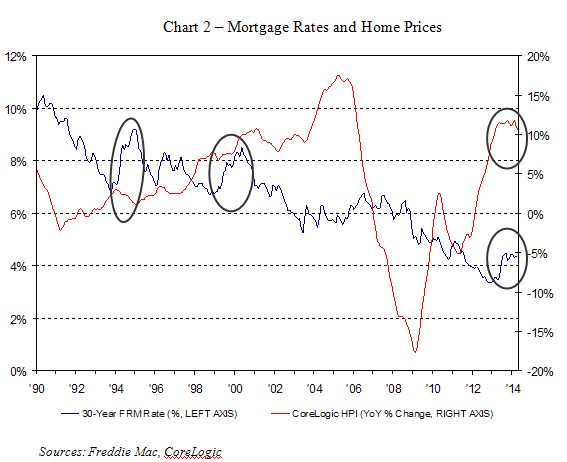 The third topic addressed in our July 2013 FM Commentary was the impact of rising mortgage rates on the demand for ARMs. During prior recent periods of sharply rising interest rates, the ARM share of mortgage applications rose to over 40 percent (ARM Share of Dollar Volume of Loan Applications per Mortgage Bankers Association). Since April 2013, that share has risen from 11.2 percent to 18.0 percent in April 2014 (see Chart 3). The rise in the ARM share is nowhere near that seen during prior periods of sharply rising mortgage rates. We believe this is likely due to tighter underwriting standards for ARMs, including the impact of the Ability-To-Repay rules, and recognition by some borrowers that if they opt for an ARM today, when their rate resets they are more likely to be paying a higher rate when interest rates rise to levels more consistent with historical norms. 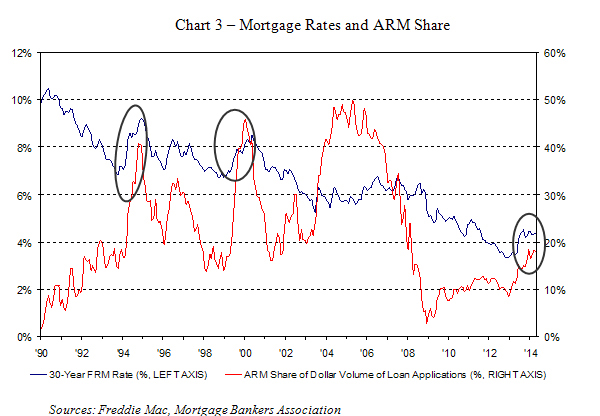 Outlook for the Second Half of 2014

Now that the housing recovery has weathered the rise in rates since May 2013 and weak economic growth in the first quarter of 2014, what is the outlook for the rest of 2014? Our current forecast is for mortgage rates to rise toward the upper end of the range established over the past year as the economy recovers from a soft patch during the first quarter of 2014.

Tight supply and continued strong demand by investors contributed to a rise in home prices in 2013 that was well ahead of the growth in household income. We expect that dynamic to wane over the course of 2014. The FHFA purchase-only home price index, included in our Fannie Mae Economic & Strategic Research June 2014 Economic and Housing Outlook, forecasts home prices to increase by approximately 5 percent in 2014 after a 7.6 percent gain in 2013. Despite our expectation for a rebound in home sales from the recent lows witnessed so far this year, we expect total home sales to post a small decline in 2014 compared to 2013—the first retreat in four years.

1 Unless otherwise stated, mortgage rates in this article are either weekly or monthly average for 30-year conforming mortgages as reported in the Primary Mortgage Market Survey published by Freddie Mac.

2 For further details regarding QM and impact on ARM originations, please see Orawin T. Velz, "Enhancing Affordability Through Adjustable Rate Mortgages: Not What It Used to Be" FM Commentary, March 17, 2014.

The author thanks Doug Duncan, Tom Seidenstein, Patrick Simmons, Orawin Velz, Eric Brescia, Brian Hughes-Cromwick, and Hristina Toshkova of Fannie Mae for valuable comments and assistance in the creation of this FM Commentary. Of course, all errors and omissions remain the responsibility of the author.

Opinions, analyses, estimates, forecasts and other views of Fannie Mae's Economic & Strategic Research (ESR) Group included in this commentary  should not be construed as indicating Fannie Mae's business prospects or expected results, are based on a number of assumptions, and are subject to change without notice. How this information affects Fannie Mae will depend on many factors. Although the ESR Group bases its opinions, analyses, estimates, forecasts and other views on information it considers reliable, it does not guarantee that the information provided in these materials is accurate, current or suitable for any particular purpose. Changes in the assumptions or the information underlying these views could produce materially different results. The analyses, opinions, estimates, forecasts and other views published by the ESR Group represent the views of that group as of the date indicated and do not necessarily represent the views of Fannie Mae or its management.

The views expressed in these articles reflect the personal views of the author, and do not necessarily reflect the views or policies of any other person, including Fannie Mae or its Conservator. Any figures or estimates included in an article are solely the responsibility of the author.