The Impact of Rising Mortgage Rates on the Housing Recovery

Since early May, rates on 30-year fixed-rate mortgages have risen from 3.35 percent during the week ending May 3rd to 4.51 percent for the week ending July 12th; an increase of 116 basis points (bps) in nine weeks.1 The question arises whether the recent increase in interest rates will stall the housing recovery, a relative bright spot in the economy during the first half of 2013.

While there is no historical precedent for the effect on the housing market from an increase or decrease in mortgage rates due to the Federal Reserve’s policy of quantitative easing, history suggests that interest rate increases at the level recently witnessed will not stop the current housing recovery. In addition, history shows that a rapid rise in interest rates tends to have little correlation with home prices. Rather, rising rates are more likely to contribute to a decrease in home purchase volume and an increase in the market share of adjustable-rate mortgages (ARMs). 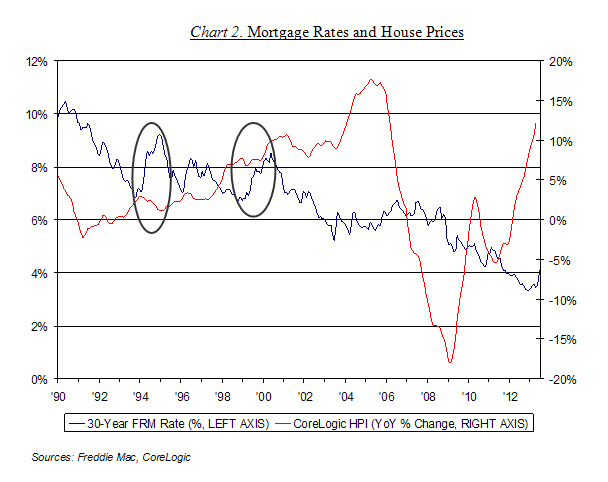 From 1992 to the present, there have been two instances of a meaningful rise in mortgage rates over a sufficiently short enough period of time to have noticeable impact on the housing market:

During the first period, October 1993 to December 1994, the rising trend in existing home sales was reversed. (See Chart 1.) However, the impact on home prices was muted. The rate of appreciation slowed, but year-over-year price changes remained positive. (See Chart 2.)

The second recent instance began in October 1998. During the course of 19 months, mortgage rates increased by 180 bps (from 6.71 percent to 8.51 percent). Compared to the earlier rate increase period (October 1993 to December 1994), this change is 57 bps smaller and more gradual (19 months as opposed to 14 months). This longer adjustment period appears to have led to a more muted housing market response. In this case, the pace of home sales and rate of increase in house prices moved sideways rather than changing course entirely. (See Charts 1 and 2.)

In both periods there was a noticeable increase in the market share of ARMs. (See Chart 3.)

However, the increased market share of ARMs reversed itself once the secular decline in rates on fixed-rate mortgages seen since the early 1980’s resumed. (See Chart 3.)

Given the limitations on ARMs under the recently promulgated Qualified Mortgage rule and the fact that rates on fixed-rate mortgages remain relatively low in historical terms, we may see a more muted increase in the ARM share of the market than in prior periods of rising rates.

The author thanks Doug Duncan, Tom Seidenstein, Orawin Velz, Brian Hughes-Cromwick, and Hristina Toshkova of Fannie Mae for valuable comments and assistance in the creation of this FM Commentary. Of course, all errors and omissions remain the responsibility of the author.