Enhancing Affordability Through Adjustable Rate Mortgages: Not What It Used to Be 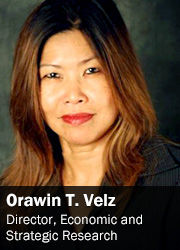 Homebuyers in the existing home market retrenched during the second half of 2013 following the surge in mortgage rates in May 2013 and a rising trend in rates through the end of last year. The bearish trend in home sales activity continued at the start of 2014, evident by the five percent drop in January existing home sales, which marked the fifth decline over the last six months. In the past, surging mortgage rates led to a sharp rise in the use of adjustable-rate mortgages (ARMs). However, in today's mortgage market, borrowers have fewer options for affordable ARM products as they face more stringent underwriting standards.i

Rising mortgage rates against the backdrop of sluggish income growth pose a risk to the housing recovery because they worsen affordability. The monthly National Association of REALTORS.® (NAR) Housing Affordability Index for all homebuyers, which attempts to measure the ability of a typical-income household to buy a typical home given prevailing mortgage rates, set a record high at the start of 2013. Higher values indicate improving affordability conditions, allowing more homebuyers to enter the housing market.ii

The index steadily trended down through most of 2013, but rebounded slightly by year-end. While the annual percentage decline in the index was the steepest since 1981, the index remained well above 100, the value at which the median family income qualifies for a mortgage on a median-priced home with a 20-percent down payment.

However, rising rates have hurt first-time homebuyers substantially more, as the NAR quarterly First-time Homebuyer Affordability Index.iii returned to levels just barely above 100 by the end of 2013, suggesting that a typical first-time homebuyer may be unable to afford a typical home in the near term, if mortgage rates and home prices continue to rise without sufficient increases in income (see Figure 1). 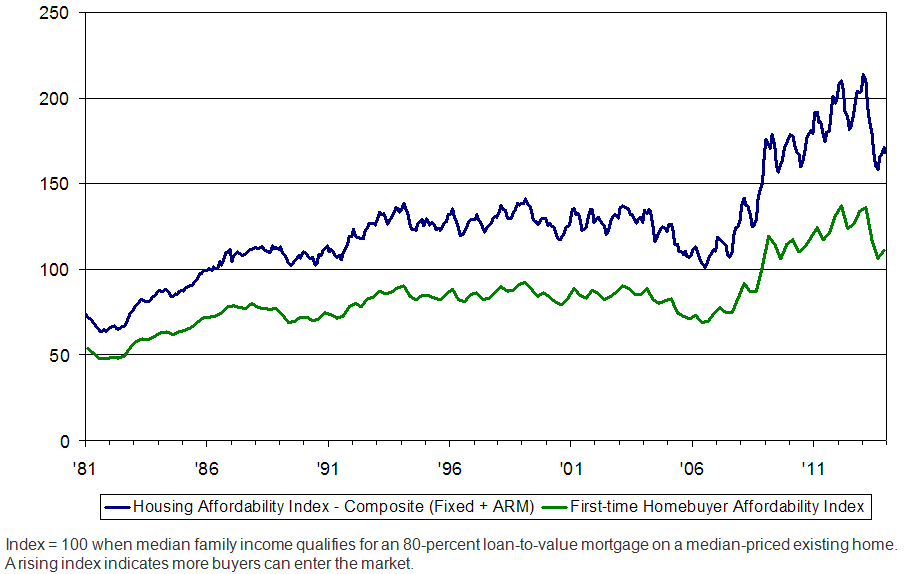 Rising mortgage rates and falling affordability have spurred interest in ARMs because they help boost purchasing power by lowering the monthly mortgage payment. Hybrid ARMs are a product of choice for those who prefer ARMs because they blend the characteristics of a fixed-rate mortgage by offering an initial period with a fixed mortgage rate, e.g., three or five years, after which the rate can adjust, typically on an annual basis, over the remaining life of the loan. The most popular ARMs offered by all lenders is a 5/1 ARM.iv To see the extent of increased affordability by choosing a 5/1 ARM over a 30-year fixed-rate mortgage, we derive an affordability index using the same methodology as NAR and effective mortgage rates from the Mortgage Bankers Association (MBA) Weekly Survey of Mortgage Applications. As you can see in Figure 2 below, choosing a 5/1 ARM instead of a 30-year fixed-rate mortgage could enhance housing affordability by about 15 percent, on average. 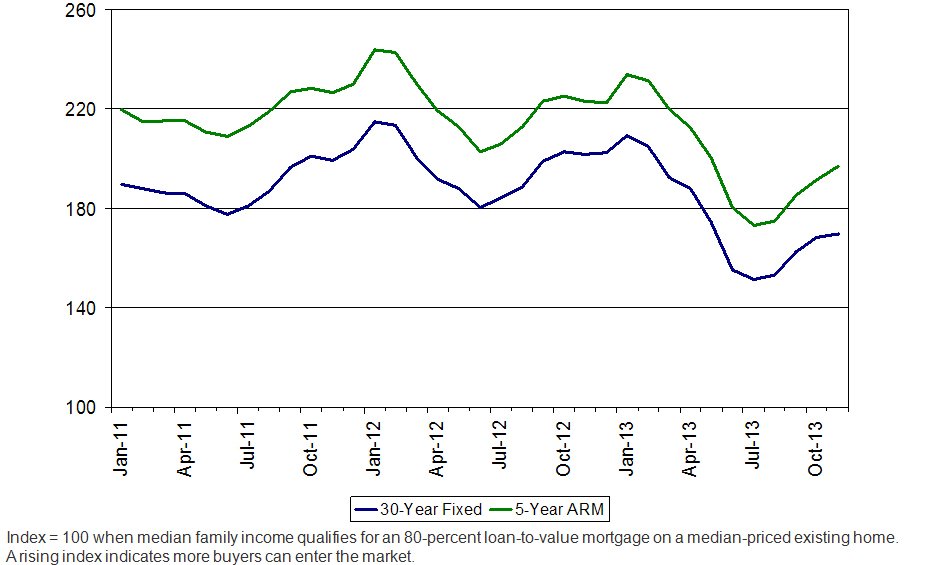 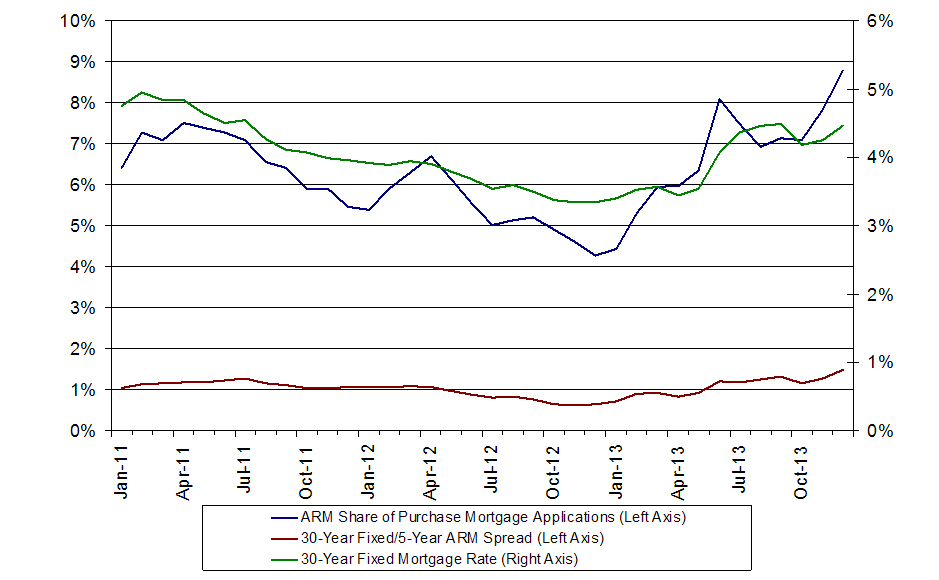 And yet, while the ARM share of purchase applications has trended up since the end of 2012, it has remained at low levels. Applications for fixed-rate mortgages have accounted for over 90 percent of purchase mortgage demand during the past three years (see Figure 4). 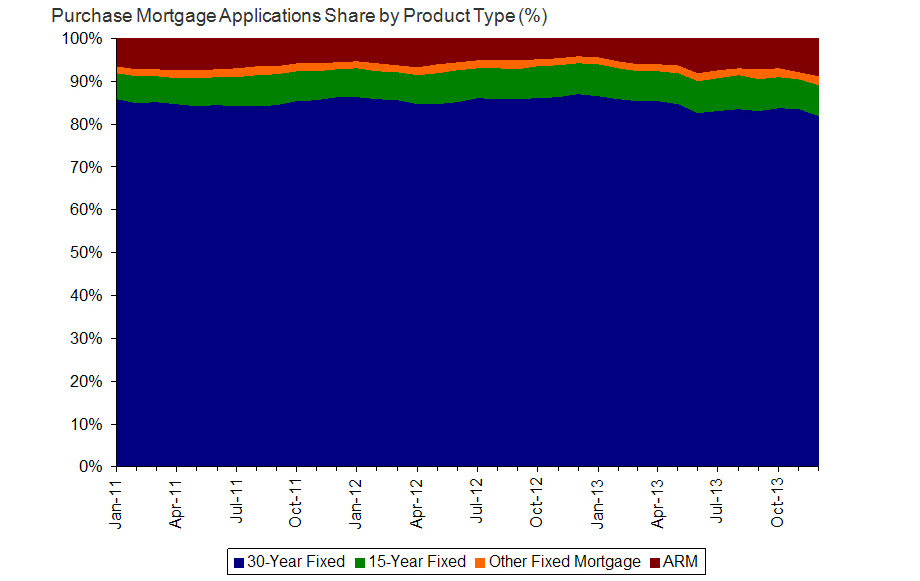 Data from CoreLogic show that the ARM share of the number of purchase money mortgages reached its recent peak of nearly 40 percent in 2005, boosted by non-traditional ARM products, including option ARMs with very low "teaser" rates where borrowers could opt for smaller payments by making interest-only or minimum payments. As the Fed began hiking the fed funds rate in 2004, it caused the rates on ARMs to reset at a much higher rate and the mortgage payments to spike, contributing to the subprime mortgage crisis. In early 2008, the resulting collapse in securitization of non-agency mortgages helped prompt a substantial rise in the limit for conforming loans eligible for securitization through Fannie Mae and Freddie Mac. This led to a decline in the share of jumbo loans from almost a third of all mortgage originations in early 2006 to less than 10 percent in mid-2008 and thus a drop in the demand for ARMs.vi As a result, the ARM share of purchase loans fell sharply, reaching its trough of less than one percent in 2009 (see Figure 5). 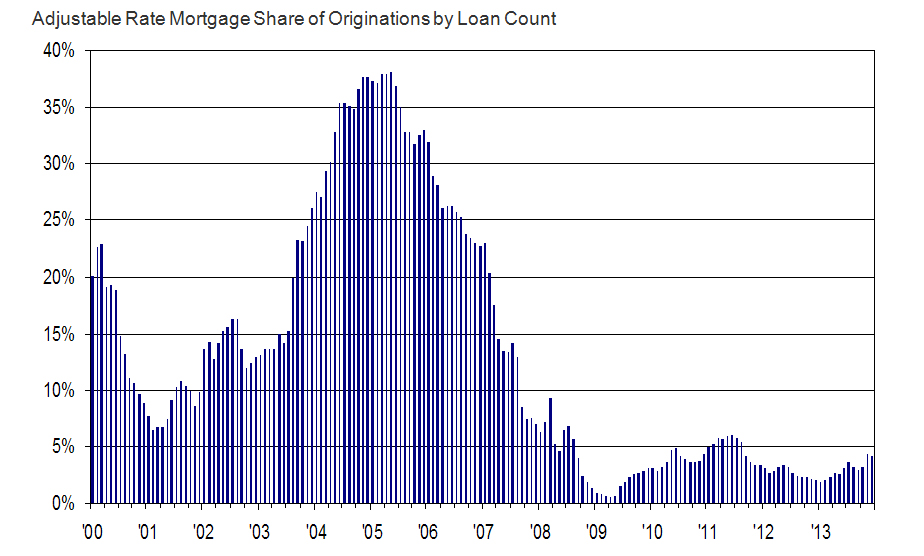 While the ARM share has risen modestly since 2009, it will likely remain subdued going forward, given tighter lending standards for ARMs and the new Qualified Mortgage rule that took effect in January of this year – which curtailed availability of the riskier ARMs, including interest-only products and those with balloon payments. The limited ability of potential homebuyers to switch to ARMs in the face of rising rates and declining affordability in the current environment supports the Economic and Strategic Research Group’s cautious outlook of the existing home market this year.

ii For example, the December value of 168 means the median family income is nearly 70 percent greater than the income needed to qualify for a mortgage on a median-priced home. This index uses a simple rule of thumb based on a 25 percent qualifying ratio for monthly mortgage payment to gross monthly income with a 20 percent down payment. Thus, it is only a crude proxy of liquidity constraints in the home purchase market and does not take into account other important factors, including FICO scores and debt-to-income ratios, which are crucial in today’s underwriting process, nor does it reflect the difficulties that many households have in amassing a 20 percent down payment.

iv Freddie Mac's Annual Adjustable-Rate Mortgage Survey of Prime Loan Offerings, released in January 2014, showed that the 5/1 ARM, for which the interest rate adjusts after 5 years, was by far the most commonly used ARM product, followed by 3/1, 7/1 and 10/1 ARMs.

vi Moench, Emanuel, James Vickery, and Diego Aragon, “Why Is the Market Share of Adjustable-Rate Mortgages So Low?” Federal Reserve Bank of New York, Current Issues in Economics and Finance, vol. 16, no. 8, December 2010.

The author thanks Joel Kan from the Mortgage Bankers Association and Sam Khater from CoreLogic for their data, as well as Mark Palim, Patrick A. Simmons, and Brian Hughes-Cromwick from Fannie Mae for their helpful comments.