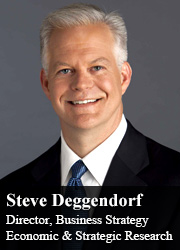 Against a backdrop of steady declines in mortgage delinquency since 2010, it is only in the past year that delinquent borrower housing attitudes have become distinctly more positive. In many cases, their attitudes moved closer to those of the general population. The more positive attitudes extend to a number of areas, including the expectation that home prices will go up, the belief that buying a home is a safe investment (see chart 1), and the likelihood of buying a home on their next move. 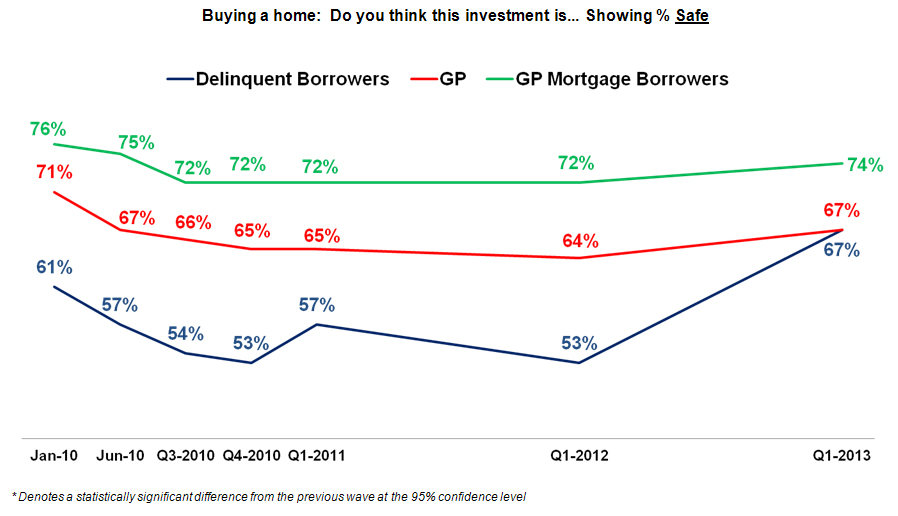 Interestingly, given the distress due to owning experienced by many delinquent mortgage borrowers, the majority still believes in the financial and lifestyle benefits of homeownership (see chart 2). This counters claims that the United States is likely to become a nation of renters. However, perhaps restrained by recent experience, delinquent borrowers feel somewhat less strongly than the general population about these benefits. 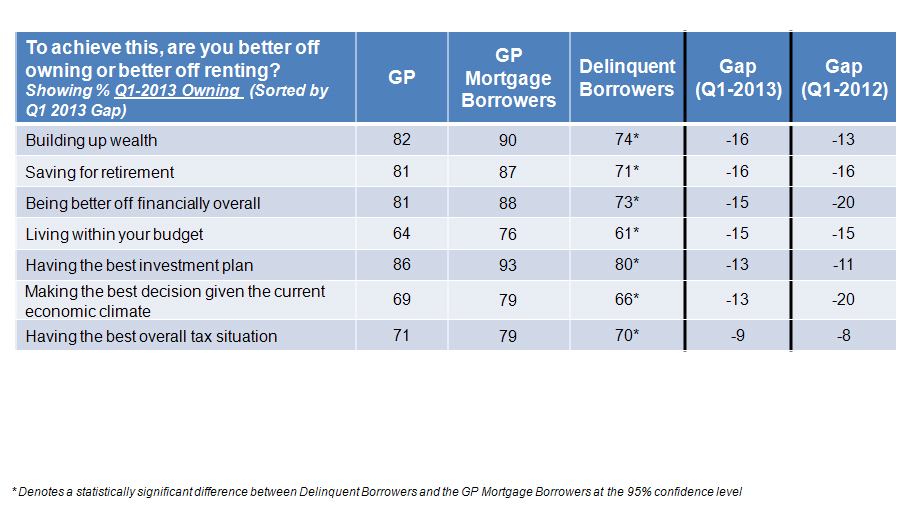 Delinquent borrowers also have become more optimistic about their financial situation as compared to last year, though at levels less positive, and in some cases much less positive, than the general population. Their increased optimism is helping to close the gap with the general population on attitudes about their personal financial situation (see chart 3), household income, debt stress, and job loss concerns.

Not surprisingly, delinquent borrowers are more likely to experience unsuccessful attempts to refinance than the general population of mortgage borrowers (see chart 4) and are especially motivated by the desire to lower their mortgage payments (see chart 5). 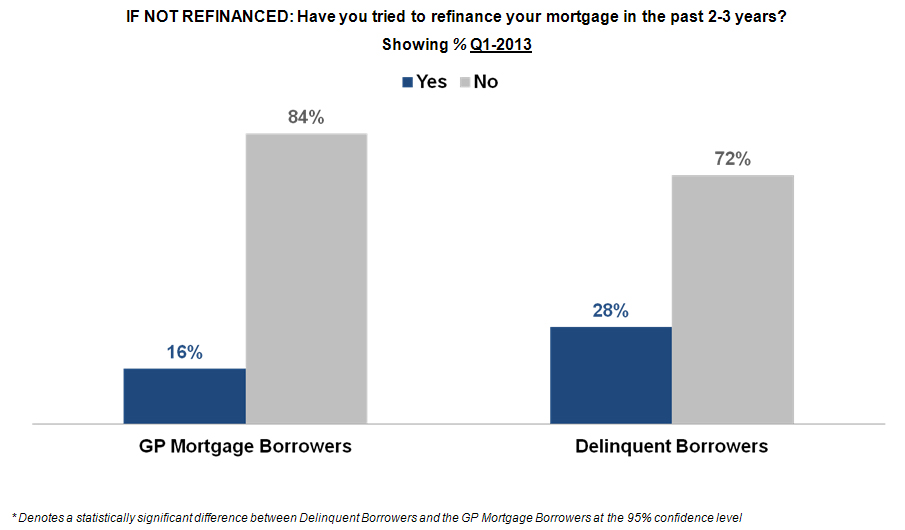 Delinquent borrowers see significant barriers to refinancing their mortgage especially when compared to the general population of mortgage borrowers. The more pronounced barriers include not qualifying and not trusting lending institutions (see chart 6). The barriers we identified for delinquent borrowers are similar to those we found for another negatively impacted group of borrowers: those underwater and near-underwater, in our March 6, 2013 analysis of the U.S. Government's Home Affordable Refinance Program, or HARP.

The more favorable homeownership and household finance attitudes that we observe from delinquent mortgage borrowers indicate the relatively high value delinquent borrowers place on homeownership and, possibly, an improving ability to manage their household finances. This could encourage those who have not yet acted to obtain still low, by historic standards, mortgage rates through programs such as the Home Affordable Modification Program (HAMP) as well as other programs that allow delinquent borrowers to refinance. Additionally, the expansion of the eligible HAMP borrower population effective June 1, 2012 may have been a factor in delinquent borrowers' housing attitudes becoming more favorable between our 2012 and 2013 surveys.

To learn more about our 2013 analysis of delinquent mortgage borrowers, a presentation with additional findings can be found here.

The author thanks Orawin Velz and Pat Simmons for valuable comments in the creation of this commentary. Of course, all errors and omissions remain the responsibility of the author.