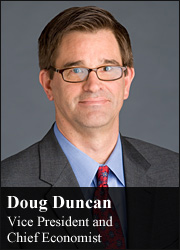 Economic activity picked up as 2011 drew to a close, and while 2011 was a disappointing year, it did end on a high note, building some momentum into the current quarter.

The unemployment rate fell to 8.5 percent in December, the low since February 2009, and existing home sales in November rose for the third time in four months to a 10-month high. As encouraging as data during the final quarter of 2011 were, we do not expect strong activity to continue into early this year. Euro zone headwinds, volatile financial markets, and fiscal contractions at all levels of U.S. government are among the factors that will continue to restrain growth in 2012 to a pace we expect will be between 2.0 percent and 2.5 percent.

A worrisome development is that home prices continue to fall, as the S&P/Case Shiller 20-City Home Price Index (adjusted) has fallen every month this year to October, except for the month of April. (See details in our January 2012 Economic Outlook Commentary "2012 - Year of the Political Economy.")

The housing market remains a key focus of policymakers. The recent publication of the white paper on housing by the Federal Reserve underscores their interest to boost the recovery through additional measures to support housing. This leaves the door open for further purchases of MBS by the central bank later in the year. The cost of the recent extension of temporary payroll taxes and unemployment benefits by two months is being offset by an increase in g-fees to be remitted to Treasury. Discussions will soon be under way to extend these measures through the end of this year, at which time a host of issues must be addressed regarding fiscal policy in coming years. We anticipate that borrowing costs will remain low and housing affordable, but the continued-large volume of distressed sales will delay a robust recovery until after the end of this year.

This commentary contains a number of opinions, analyses, estimates, forecasts, expectations, and other forward-looking statements, which are based on the writer’s current assumptions regarding numerous factors and are subject to change. These forward-looking statements should not be construed as indicating Fannie Mae’s business prospects or expected results. Actual outcomes may differ materially from those reflected in these forward-looking statements due to a variety of factors, including, but not limited to, those described in “Risk Factors” in our quarterly report on Form 10-Q for the quarter ended September 30, 2011 and our annual report on Form 10-K for the year ended December 31, 2010.